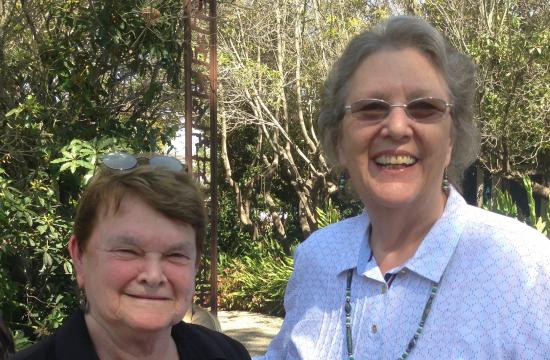 Listening, sometimes singing along, sitting in a beautiful Santa Monica garden, were a large group of people who had come to celebrate the birthday of Medicare and to support the work of the PNHP CA (Physicians for a National Health Program CA) to open Medicare to all Americans.

Council Members Ted Winterer and Gleam Davis welcomed everyone to the event and spoke of the City Council official statement in support of Single Payer in CA.

State Senator Ben Allen spoke about the successful work of the State Legislature to extend Medicaid to the children of undocumented workers in CA and their ongoing work with the Federal Government for a waiver to allow undocumented workers to be able to buy insurance on the Health Care Exchange.  He also spoke about data showing health care high costs and poor outcomes in the U.S. as compared to Countries with National Health Care.

Sheila Kuehl, now Los Angeles County Supervisor and formerly a several time Member of the State Legislature, spoke about the history of health care, the beginnings and growth of Medicare and her Bill to establish a Commission responsible for the program for Single Payer Health Care in CA.

Her Single Payer Bill was introduced several times, to wide support, but was not realized.  She reminded the audience that even if it had been successful it would have needed to go to the voters for approval.

Kuehl continues to be optimistic saying that she believes incremental changes will continue until “Single Payer becomes inevitable.”

MedicareResources.org outlines the history of Medicare in the U.S from the 1912 platform of President Teddy Roosevelt, which included the idea of a national health plan.  President Franklin Roosevelt had wanted health care to be part of the Social Security Act.

§ In 1945 President Harry Truman called for the creation of a national health insurance fund to be open to all Americans.

§ President John Kennedy made an unsuccessful push for a national health care program for seniors.

§ The retirement wave of baby boomers was once expected to cause Medicare to become a budget buster. The Congressional Budget Office is now projecting lower increases than once thought, thanks in part to cost savings embedded in ObamaCare.

§ MedicareResources.org records 49,435,610 people as receiving health coverage through a Medicare program in 2014.

PNHP CA focuses their action on creating Medicare for all and works to support every effort to increase access to health care for everyone. http://pnhpcalifornia.org/

In this election year our health care is a front and center issue.  I am grateful to Bernie Sanders. We have all benefited from his commitment to health care for all and for helping our nation to focus on this issue.

I am grateful to Hillary Clinton.  We have benefitted as a nation by her successful work to make a reality of the plan to insure millions of American children and by her long-standing commitment to achieving health care for all.