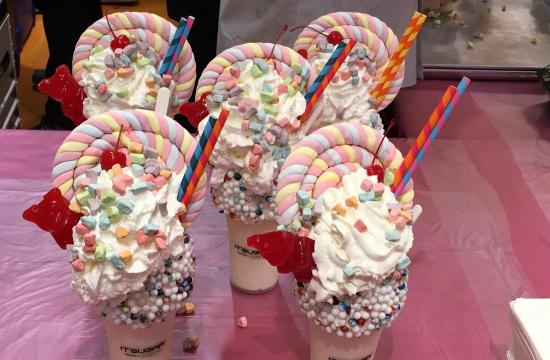 Black Tap famously serves extravagant milkshakes, filled well past their brim with sweet ingredients. Their collaboration with It’ sugar, called the It’ sugar XL Gummy Shake by Black Tap, includes a large gummy bear and larger gummy pinwheel as a backdrop, and a whipped cream and marshmallow topping, with a vanilla milkshake as its base.

A line started to form well in advance of the 1 p.m. start time at which the free milkshakes began being given out. Sisters Lilcalynette and Arquilla Howard were at the front of the line, and had been waiting since 10:30 in the morning. They first heard about the event on TV news.

Tammin Sursok, from the ABC drama “Pretty Little Liars,” and Francesca Capaldi, who stars in Disney’s “Dog With A Blog” were handing out milkshakes alongside Black Tap’s chef and founder Joe Isidori.

“Black Tap is rooted in nostalgia,” explained Isidori, who hopes that their extravagant milkshakes will evoke people’s inner child.