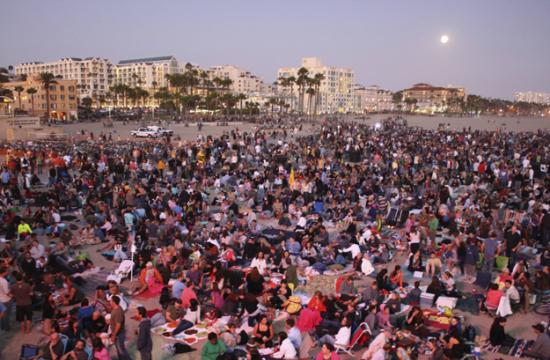 A recent article in the Mirror highlighted the fact that it costs an estimated $50,000 a show to put on the free Summer Twilight Concert series at the Santa Monica Pier. In considering that overhead, the inevitable question arose: Is it worth it?

A photo accompanying the article showed a group of music fans sitting down at the Pier for a concert and everyone in the group was grinning from ear to ear. That’s a fair and reasonable piece of evidence to submit for any conversation about the value of the summer concerts: They make people happy. But I’d like to suggest that there are larger stakes involved in sustaining the Twilight Concert Series besides just shaking the air around the beach with an ever-expanding format of music from around the world.

A bandshell in Daytona Beach, Florida, was opened on July 4, 1937. For the sake of argument, let’s say that’s roughly the time that the idea of crowds gathering for free concerts in cities across America took hold. That means that for about 80 years Americans in various cities have been gathering peaceably with their neighbors, tourists, and a general crowd of strangers united by the simple idea of enjoying some free music outdoors.

Much to our shared chagrin, there now are more things to worry about anytime a large crowd of people gathers. I don’t have to give you a litany of what we might call the present-day concerns involved with gathering a large crowd.  It’s possibly interesting to note that EDM concerts have come under scrutiny not because of the inability of large groups of fans to get along with each other in our new age, but because individuals attending those events seem driven to zonk themselves into a dangerous health crisis with drug and alcohol binging.

No such substance abuse problems haunt the Twilight Concert Series at the Pier – although you can almost set your watch to when you might get a contact weed buzz at some shows – because great care is taken in planning the programs. In fact, I think it’s fair to say that there can be a larger problem with crowds getting restless over unengaging opening acts than there is with any sort of overdose injuries.

But money can and does change things. So let me attempt to context what I think are the social benefits of the Pier music series just in case rising costs are stirring thoughts of a cutback in the minds of city movers and shakers.

First of all, the beach is to Santa Monica what the Grand Canyon is to Tuweep, Arizona. It’s our city’s reason for being, and it’s why millions visit and spend money here. Humans want to engage the Pacific Ocean, and that’s what we hope they will do. It’s only logical that an area that is already a gathering place for thousands by day would have a program for entertaining them as the sun goes down, and it shows the good taste and openness of our city to put internationally renowned musical acts on a stage to be enjoyed by all ages.

Secondly, there’s an educational value. Whether Save Ferris and Cibo Matto will in any way open up your world view, I certainly think an hour spent enjoying Mavis Staples or the Ohio Players is an hour well invested in appreciating the pantheon of American popular music. Readers of this column may remember that I thought the Pier series show from Morris Day and The Time was such an exuberant celebration of fun energy that it might have actually had powers of healing. There are music acts that some folks – from various generations – might never experience except as a freebie at the Pier. To me, these pleasant evenings can be the live music equivalent of those “The More You Know” public service spots on NBC. “Kids, talk to your parents about funk music. You’ll be glad you did.”

And then there’s this: Just because it get more expensive and challenging to gather large crowds due to concerns over security and safety doesn’t mean we should let go of the notion that we can still have those gatherings in America. To read about insane acts of homicidal frenzy perpetrated on “soft targets” in other parts of the world scares me just as much as it might you.  But when they shut us down, the insane people win. It’s not an act of courage to go to an event where a lot of strangers have gathered to enjoy something like music surrounded by others we may never meet again, but it is a human need. Our basic humanity is predicated on a shared trust of, well, humanity. (Cue organ intro: Buddy Miles’ “We Got to Live Together.”)

Some may say I’ve made too much of a pale shadow of cost hanging over the Pier concerts, but we are all wondering these days if certain simple pleasures are leaving the experience of life because we need to be more cautious and on alert. I think the very thing we need when this feeling grips us is to gather outdoors and boogie. (Feel free to quote me.) I am always bothered by corporate tie-ins to “free” public events, but in the case of the Pier concerts it would be great if somebody enjoying the benefits of Santa Monica’s “Silicon Beach” economic upturn would step in and help keep the music playing at the Pier. I can’t promise you I’ll download your app, but I’ll certainly party with you on the Pier.