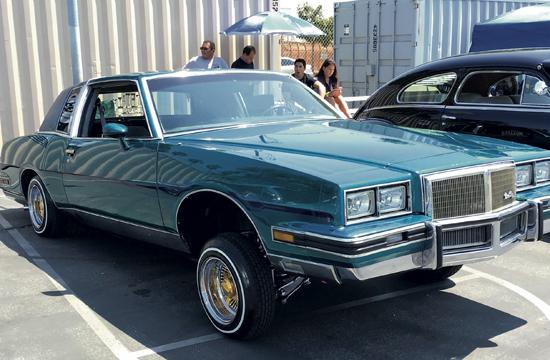 “We are hosting the Unity Classic Car Show to bring awareness to the community that Chicano/Latino culture still thrives in West Los Angeles,” said Charlie Chacon, director of L.A. Chicano culture documentary “West Los,” which co-sponsored the event. “Through this family-friendly event we plan to educate and inspire everyone, but especially our youth, to have pride in our culture and to contribute to the continuation of this beautiful art form that we know as lowrider culture,” he said.

Funds raised at the car show will be used to aid youth services and events that promote Chicano and Latino culture.

Alongside its display of classic cars, the event featured local food stands and food trucks, as well as multiple DJs and a performance by Mayaztek. Before the end of the day, trophies were given out to the cars determined by a team of judges to be Best in Show. Awards were divided by decade, spanning the 1930s-60s, with a separate category for trucks.

Mario Banda, who grew up in Santa Monica and West L.A., was showcasing a Pontiac Grand Prix he has owned since 1983, when he was in high school.

“Since I was a kid I’ve always had a passion for cars,” Banda said.

Sigi Aguirre, who was showing his 1964 Chevy Malibu, has also been interested in cars for most of his life. He worked on his first motor at 12 years old. The Chevy Malibu has been in his family since 1978.

For more information about the Pico Youth & Family Center and a list of their upcoming events, visit picoyouth.org.