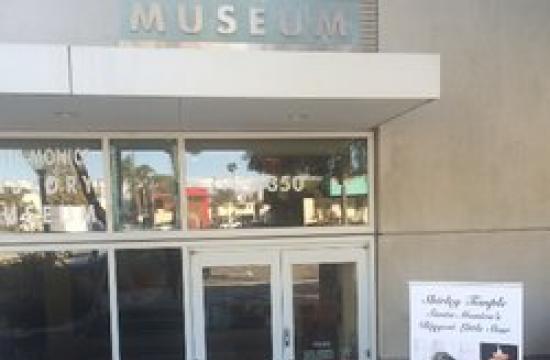 The Santa Monica History Museum is excited to announce it will be participating in the 2016 History Keepers: Traversing Los Angeles exhibition organized by the California Historical Society and LA as Subject.

The Santa Monica History Museum will be loaning a 1908 Los Angeles Pacific Company Rail Pass from its John P. Jones collection to be displayed in the exhibition.

The exhibition will be on view from August 5-27, 2016, Tuesday-Sunday, 10:00am-4:00pm at El Tranquilo Gallery & Visitor Center located at Olvera Street, El Pueblo de Los Angeles Historical Monument in downtown Los Angeles. The Los Angeles Pacific Company operated interurban railways for passengers and freight between Los Angeles and numerous areas of California, including Hollywood, Santa Monica, and other beach towns such as Venice, Playa del Rey, Hermosa Beach, and Redondo Beach. Electric trains from one to six cars in length could exceed sixty miles per hour between stations.

That Georgina was from a wealthy family with access to private transportation but also rode the rail lines is an indication of how integral the rail system was to city life. Unlike our current rail passes, this pass is printed on thin card stock, filled out by hand, and features the signature of the general superintendent.The History Keepers: Traversing Los Angeles exhibition is organized by the California Historical Society and LA as Subject and brings together over 30 archives, libraries, museums, and private collectors from the Los Angeles area including the Santa Monica History Museum; Bison Archives/Marc Wanamaker; University of Southern California, Doheny Memorial Library; Los Angeles Public Library; Chinese American Museum; and San Fernando Valley Historical Society.

The exhibition showcases objects from the esteemed participating organizations and individuals to help tell and understand the remarkable history of Los Angeles and celebrates the institutions and collectors who preserve this region’s stories. Diverse displays include photographs and drawings, maps and albums, film and books, railway and street signs, even the steam truck and knife of a famous outlaw. “Throughout its history, Los Angeles has been mapped and remapped, carved up, and then reconfigured again to accommodate the demands of new generations,” said Jessica Hough, Director of Exhibitions at the California Historical Society, who curated the exhibition with Liza Posas, LA as Subject Coordinator. “We see evidence of this in the diverse selection of objects from collections across the Los Angeles region. We hope visitors to the exhibition will ponder all the millions of people who for hundreds of years have gone zigzagging across Los Angeles by trolley or streetcar, on horse or on foot, by automobile or train, and what they might have seen along the way.” For more information please contact Kathryn Evans at: (310) 395-2290 or kevans@santamonicahistory.org.