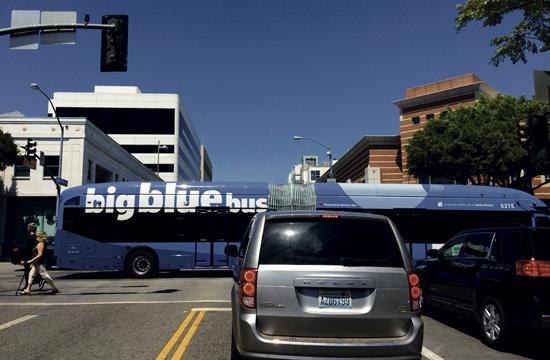 In a candid address about Santa Monica’s traffic at Downtown Santa Monica Inc.’s annual meeting last Thursday, Santa Monica City Manager Rick Cole quoted President Franklin Roosevelt. Cole noted that Roosevelt mentioned Common Sense (one of my favorite phrases) and the courage to just try something. If the attempt fails, admit it and try something else. Roosevelt’s conclusion was “Above all, try something.”

Cole admitted that our traffic downtown is the worst it’s ever been and we are experiencing “dramatically” increased pedestrian and vehicular traffic.

“Our streets are jammed,” Cole said. He mentioned an email he received from a visitor who was “trapped” in one of our downtown parking structures for over an hour trying to exit onto our gridlocked streets.

Mr. Cole must be aware that long time residents and regional visitors perceive our streets as a bumper-to-bumper mess. The continual misplaced emphasis on finding alternative forms of mobility has not improved the traffic problem. We tout Breeze Bike Share, Uber, Lyft, crosswalk scrambles, Go With The Flow, The Esplanade and the Expo line as examples of our efforts to mitigate traffic.  However more people equal more traffic. More is more! The number one hot button issue in our town is congestion and gridlock. Downtown Santa Monica Inc. may laud the 16 million individual visits to the Promenade in 2015. Santa Monica Travel & Tourism can point to the 8.4 million tourists who poured their dollars into our hotels and shops last year, and we are thrilled (mostly) that Santa Monica Pier is now the 8th most “instagrammed” spot on earth. However the lack of a plan to ease traffic congestion, our city government’s disregard for resident needs, and the 3.2 million square feet of development that the new Downtown Community Plan would add by the year 2030, are infuriating our residents.  Residents cry out about traffic but their pleas are not heard.

SMart has previously called for proper planning. Residents have repeatedly protested plans for mega projects in our 227-acre downtown core because they have seen the effects of traffic on their lives. Admitting the problem is worse than our City Council and administration could have conceived is a good first step. However, as in a 12-step program, more transgressions need to be admitted in order to take corrective steps. First, we cannot “build our way” out of this mess.

Second, our traffic-engineering program has been a failure. We must stop further development downtown until the effects of the temporary mitigation measures that Rick Cole says the city is taking are tried and adjusted.

Third, we must develop a traffic management plan that actually respects the necessity for resident circulation, rather than simply pay lip service to the needs of our 94,000-plus residents.

• Don’t Block The Box! Saturation of our streets has led to blocking of our intersections. The substantial fines for this infraction are rarely enforced. Let’s enforce the law.

• Attendance at the Twilight Dance Series is now out of control. Solve it.

• Stop building mid-rise buildings on narrow streets that effectively trap air pollution and noise, increasing the exposure of motorists and our urban population.

• Provide traffic officers on Ocean Avenue, 4th and 2nd Streets during peak times. Downtown SM Inc. should pay for these services, not taxpayers.

• Time traffic lights so that cars can move smoothly through intersections.

• Reduce parking prices on the edges of downtown

• End consideration of a high-rise building at 4th and Arizona. Our streets can’t handle it.

There is much to do. We’re glad that our city’s CEO admits what our residents all too painfully know. The rise of the resident-rights Residocracy group can be linked directly to reactions to proposed developments that would increase our traffic exponentially. Gridlock is a domino effect. City Council’s development proposals and decisions, replete with unrealistic parking and transit approaches, keep piling heavy dominos atop our city. Add to that their incentivizing of high density projects beyond the capacity of our streets, their attempts to increase office space thereby adding to the workforce/housing imbalance, and appeals by developers to have city staff service their money-making agendas instead of supporting residents. A Persian-American resident told me her culture has a proverb that translates, “First make the hole and then plant the tree.” It would be wise for our city to follow that axiom.