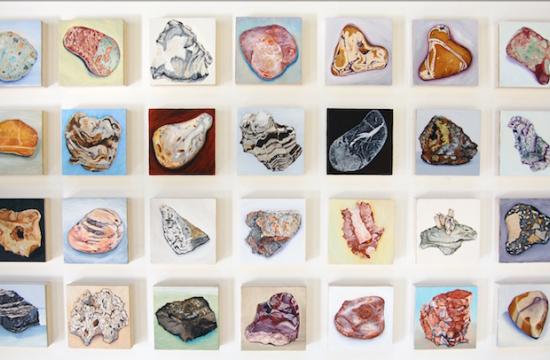 The Language of Landscape, a new exhibition featuring works in various media by southern California-based artists Christine Nguyen, Pam Posey, John Dembski and Melissa Huddleston, is on view July 29 through September 26, 2016 at the Annenberg Community Beach House. On Tuesday, August 9th, from 6:00pm to 8:00pm, an opening reception features a meet and greet with the artists, with light refreshments and musical accompaniment from “there is a fox.”

The Language of Landscape features representational and abstract vistas drawn from the fiction of the mind’s eye to the presumed nonfiction of the natural world. Using drawing, painting and mixed media, four artists express the intersection of inner and outer realities.

Influenced by scientific illustration, and the work of naturalists and polymaths such as John Muir and Ernst Haeckel, Christine Nguyenseeks to convey a world unseen by the naked eye. Pam Posey’s speculative interpretation of nature highlights often overlooked aspects of geology and topology and emphasizes an alienation from the familiar. John Dembski has created a series of works that interrogate the need to control and structure what is untamable. Struck by the countless depictions of our national parks as crisp and beautiful wonderlands, Melissa Huddleston paints landscapes as a departure from this fantasy, striving toward a reconciliation with the unkempt wilderness.

Christine Nguyen is based in Long Beach, California. She received a BA from California State University, Long Beach, and an MFA from the University of California, Irvine. Nguyen is a recipient of the 2015/2016 COLA (City of Los Angeles) individual artist fellowship. Her works are included in collections at Los Angeles World Airports, the Hammer Museum, Ohio’s Cleveland Clinic and the Getty Research Institute. lephant.com

Pam Posey has been exhibited at Craig Krull Gallery, Zask Gallery, the Huntington Beach Art Center and the Bez Maltz Gallery at Otis College of Art and Design. Posey received a fellowship from Nes Artists Residency in Stagasfround, Iceland in 2013. She is currently the director of the Sam Francis Gallery at the Crossroads School in Santa Monica, and holds an MFA from the University of Massachusetts, Amherst. pamposey.com

John Dembski received a BFA from the Massachusetts College of Art in Boston. His work has recently been exhibited at the Huntington Beach Art Center and the Keystone Gallery in Los Angeles, and is included in the collection of the Philadelphia Museum of Art. He lives in Long Beach.

Melissa Huddleston lives and works in Los Angeles. She received a BA from Western Washington University. Her works have recently been included in exhibitions at Monte Vista Projects and Subliminal Projects in Los Angeles. Other projects include an artist book titled The Pongo’s Dream, a collaboration with artist Benjamin Lord, presented as part of a curated program in 2015 at the Los Angeles Art Book Fair at the MOCA Geffen. mhuddleston.com

there is a fox is a solo project by composer Hiro Makino, occasionally joined by friends. He currently resides in Kyoto, Japan, after living in Canada and California most of his life. Other music projects include oto, soto, elephant day and Turn on the Sunlight.thereisafox.tumblr.com