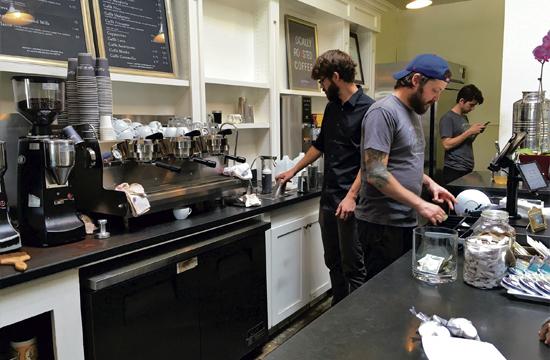 Santa Monica’s Caffe Luxxe recently hosted a celebration of its 10th anniversary, giving out free drinks to customers, and hosting a photo exhibit as part of Montana Avenue Art Walk.

“We really attempted to showcase our love for our community as best as we can, by featuring art that would not normally be accessible to the general public and showing it in a casual everyday space,” said Caffe Luxxe co-owner Gary Chau of the celebration. “Then by giving away free drinks to everyone who walked in the door was our way to give thanks to all of our supporters for the past 10 years.”

The exhibition of photos of the Beatles and Rolling Stones served as a prelude to Caffe Luxxe’s August 3 release of their new 10th Anniversary coffee blend, which combines beans from Costa Rica and Uganda. This is the first time Caffe Luxxe has introduced a new blend since their inception in 2006.

Since Caffe Luxxe opened, small, artisanal coffee shops have gone from a rarity to a staple of Los Angeles food culture.

“Customer knowledge about artisanal small batch coffee is exceptionally high,” Chau told The Mirror. “In most cases, now we don’t necessarily spend a lot of time focusing on educating the basics, but now on the subtle nuances for the differences in style of coffee and places from which it comes from.”

For a list of store locations and more information on their 10th anniversary blend, visit caffeluxxe.com.