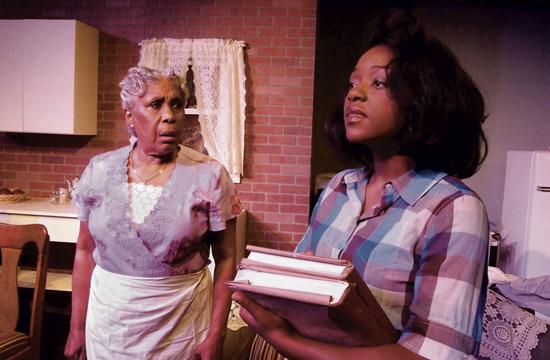 Currently playing at the intimate Ruskin Group Theatre in Santa Monica is the award-winning “A Raisin in the Sun” by Lorraine Hansberry. With a stellar cast and great production team, Raisin at Ruskin is definitely worth your time this season.

Perched feet away from the living room/kitchen of the Younger family in 1950s Washington Park, Chicago, you take the place of a fly-on-the-wall as the African-American family deals with issues of the time after receiving a $10,000 inheritance check.

Angelle Brooks as Ruth Younger, daughter-in-law to matriarch Lena “Mama” Younger, played by the outstanding Starletta DuPois, effortlessly draws you into her world and her struggle to find herself in the dichotomy of her role of mother/wife/worker, and woman.

Redaric Williams’ commanding performance as Walter Lee Younger has you on the edge of your seat as you take the agonizing twists, turns and consequences of an ambitious African-American man striving to break the stereotypes of his generation, at all costs.

The production mirrors many issues of today’s world, best exemplified in the role of Beneatha Younger, played hilariously-at-times by the talented Charlotte Williams, the young medical student who decides to find her “roots” much to the surprise of all around her.

“A Raisin in the Sun” was written by Lorraine Hansberry, winning the Best Play Award from the New York Drama Critics’ Circle, as it made history when it opened in 1959.

“Lorraine Hansberry has given the world a priceless jewel in the writing of this timeless play,” said today’s director Lita Gaithers Owens. “From the moment it premiered it offered insight on the plight of African Americans in urban cities, and it continues to speak to the racial issues that are facing our country today.”

“The American Dream, for some in this nation, comes after enormous perseverance and tenacity. But for many, it simply doesn’t come at all. So, what can be discovered by taking a look from the view of those who get weary while waiting on the manifestation of their dream? Perhaps, by experiencing this play, it takes us on a journey of personal discovery and enlightenment which leads us to a path of a clearer understanding of the importance of social justice and equality through the power of love for one another,” Owens said.

“A Raisin in the Sun” will have you absorbing such love, laughing out-loud, holding your breath, and crying at times during the three-hour production. Scene changes are quick and masterful, and the ease of all involved make the evening a thoroughly-enjoyable experience. Tickets are $20-$25, and the show runs Fridays through Sundays until September 17. For more information head to: ruskingrouptheatre.com.