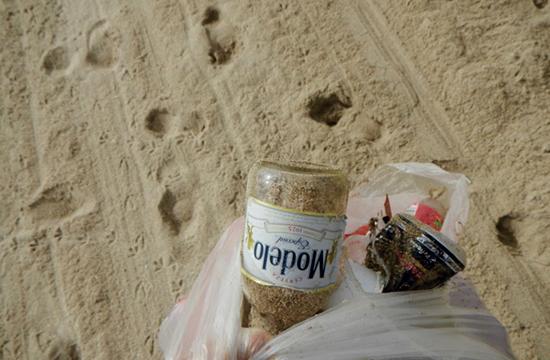 Morning walks by the shoreline on Santa Monica’s beaches have become far from pristine of late, with joggers dodging glass bottles, empty beer cans, and an increasing array of plastic trash.

Summer day visitors and tourists are being touted as the reason for the trash increase, while questions are being raised on who is responsible for picking up beach-goers’ dumped litter.

According to the City of Santa Monica, the City manages the trash cans on the beach, but the cans are often underutilized and people drop or leave trash far from the cans on the sand.

“We have tractors that are out there daily lining up the trash before another machine comes to collect and dump the trash off site,” Constance Farrell, Public Information Coordinator for Santa Monica City told The Mirror. “We also have a small but mighty team of City employees who work on the beach seven days a week. Community service crews also help keep the beach clean.”

Why then the trash lining the shore?

“We can only go to the high tide line with the large equipment that picks up the bulk of trash on the beach,” Farrell explained. “State law restricts equipment near the water line to protect microorganisms. Our team hand picks trash near the water’s edge, but it’s constant work.”

For  Santa Monica resident Will Maguire, picking up trash has become part of his morning routine.

“I have personally collected bags and bags of trash,” Maguire said. “This morning, for example, I picked up trash from 9 – 10 a.m. and then went for a swim at Tower number 26 at Ocean Park.”

“It is particularly bad between Towers 16 and 17 where I often fill up a bag. Between 17 and 20, I pick up another bag full…Lots of plastic water bottles and aluminum cans and even glass bottles,” Maguire said.

“For the concerts, we have increased our staffing and the hours for pick up,” Farrell said. “Crews clean the beach until 2 a.m. on Thursday evenings. We have also added 30 – 40 trash cans.”

For Maguire, the trash left by the water’s edge is a serious problem. “By contrast the L.A. County Department of Beaches & Harbors does a much better job of cleaning the beaches in Venice and at Will Rogers,” according to Maguire, “they even have a piece of equipment that cleans up the trash from the berm to the water line.” Photos on the County’s website attest to their cleaning of the low-tide waterline with heavy equipment far below the high-tide mark.

Santa Monica City wants trash-concerned citizens to register their complaints on their GO system, or via social media, facilitating a request to the beach maintenance team to pick up the trash within 24 hours. They also advise that residents can help the City our by picking up trash themselves. To download the Go app, search GO SMGov in app stores.