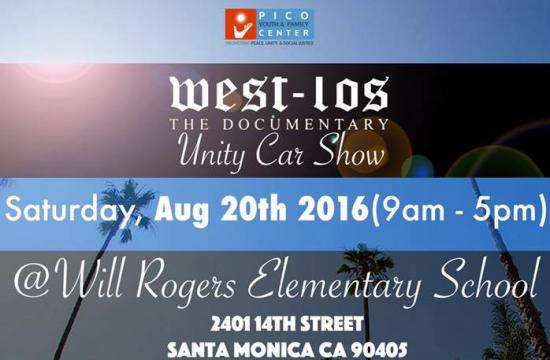 Pico Youth & Family Center in partnership with West Los the Documentary are hosting the first Westside Unity Classic Car Show in Santa Monica to raise funds for youth services and events that promote Chicano/Latino culture. The car show will be held on Saturday, August 20th from 9:00am to 5:00pm at Will Rogers Elementary School in Santa Monica.

The event is free for youth 12 and under. Individual tickets are $12 and $20 per couple. Headlining the live entertainment will be LA-based Mayaztec along with special guest DJ’s. Food trucks and vendors with unique items will also be featured. Over 100 classic cars of various makes and models, some dating back to 1930’s will be on display.

"We are hosting the Unity Classic Car Show to bring awareness to the community that Chicano/Latino culture still thrives in West Los Angeles. Through this family-friendly event we plan to educate and inspire everyone, but especially our youth, to have pride in our culture and to contribute to the continuation of this beautiful art form that we know as low rider culture," stated Charlie Chacon, creator of West Los the Documentary.

It is estimated that more than 300 lowrider cars exist belonging to more than 10 car clubs in West LA alone. Low riding has existed for decades but very few have documented this amazing art form. Chicano and Latino communities of Culver City, Santa Monica, Venice and Sotel (West LA) have existed for decades but very little has been documented about the people and culture that make up these historic ethnic enclaves. Community leaders and activists throughout the West Los Angeles region are fighting to stay visible in the face of market pressures that are displacing long term residents.

"At a time when low income residents of all backgrounds, especially Latino and African American residents, are being pushed out of Westside communities due to gentrification we feel that unity, awareness and visibility is needed more than ever. This car show is necessary to celebrate our region’s cultural diversity that is at risk of extinction," stated Oscar de la Torre, School Board member from Santa Monica Malibu Unified School District.