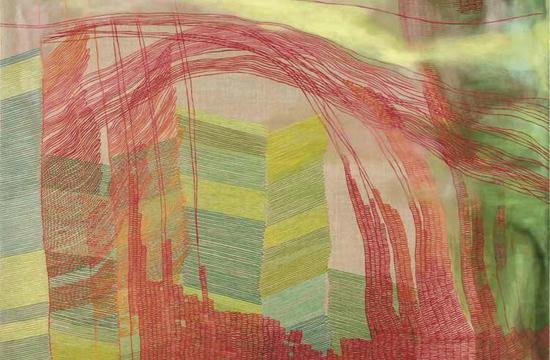 Last Saturday, almost half of the 40+ galleries that make up the Bergamot Station complex began showcasing new works. The Ruth Bachofner Gallery, which opened 30 years ago and has been located at Bergamot Station since 1998, premiered new exhibits by artists Trang T. Lê and Trygve Faste.

Lê’s exhibit, which is titled In Transition, recalls both her childhood, during which she fled the Communist regime in Vietnam, and her present-day family life. Gallery director Ruth Bachofner explained that Lê lives with three children, but continues to work on her art every day.

“She is just so serious and devoted to her art,” Bachofner said. The Ruth Bachofner Gallery first showcased Lê’s works in 2009, and has continued to showcase exhibitions by Lê ever since.

A reception was held on Saturday to simultaneously commemorate the opening of Lê’s exhibition, as well as a new exhibition by Trygve Faste titled Op-Tech. The Ruth Bachofner Gallery regularly hosts exhibitions by two individual authors simultaneously.

The inspiration behind Op-Tech was the effects of consumerism on contemporary products, design and technology.

“Similar to the way in which science fiction can address societal issues in a way that removes them from the immediate reality of politics so that they can be more openly and less controversially discussed, I use these paintings to examine the duality of futuristic opportunity and tragic side effect that can be found in many aspects of consumerism,” said Faste in his artist statement.

Both artists’ exhibits will be on display through October 15. For more information on these exhibits and the gallery, visit ruthbachofnergallery.com.