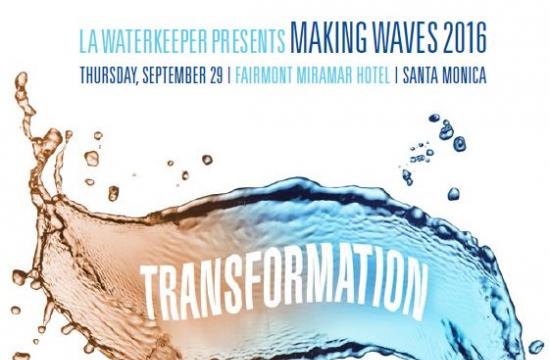 From 6:30 p.m. to 9 p.m., guests will celebrate the milestones Los Angeles Waterkeeper has reached in pursuit of safe and healthy waters, while relishing hors d’oeuvres, cocktails and live music in the courtyard of the historic Fairmont Miramar Hotel.

Tamminen, CEO of the Leonardo DiCaprio Foundation and former Secretary of the California Environmental Protection Agency, will emcee the event, helping salute the progress being made to make the waters healthier for all Angelenos. In 1993, Tamminen founded the Santa Monica Baykeeper, now Los Angeles Waterkeeper, and served as executive director for six years. Today, he oversees the Leonardo DiCaprio Foundation, including the implementation of the climate change action plan and global environmental initiatives.

“It’s an honor to have the man that started Santa Monica Baykeeper and has served as a mentor to me for nearly two decades joining us at the first Making Waves celebration since I took the helm of LA Waterkeeper,” says Bruce Reznik, Los Angeles Waterkeeper Executive Director. “Since its founding, LA Waterkeeper has been at the forefront of water protection in Los Angeles County, and much of its successes are due in large part to Terry’s tireless work and forward-thinking vision.”

At the event, guests will raise a glass to three “Wave Makers” who have had a tremendous impact on LA Waterkeeper and the health of the region’s waters:

SA Recycling – An industry leader in auto and metal recycling, SA Recycling converted its Terminal Island site to a zero discharge facility and is helping set the standard for the thousands of industrial facilities that collectively have a tremendous impact on the health of the region’s waters.

Lawyers for Clean Water – A critical partner of the organization, Lawyers for Clean Water served as LA Waterkeeper’s counsel on dozens of cases, including the settlement with the City of Los Angeles that resulted in the investment of over two billion dollars in the city’s sewage collection system and helped reduce sewage spills by 85 percent over a decade.

Jay Borzi – A longtime board member and avid outdoor enthusiast, Borzi is a philanthropist whose commitment to clean water has fueled the organization’s success for decades.

will host the VIP after party from 9 p.m. to 10 p.m. to continue the celebration.

To donate an item to the silent auction, please click here

To sponsor this event, please fill out this form

For more information about Los Angeles Waterkeeper and how you can protect the region’s waters, please visit www.lawaterkeeper.org