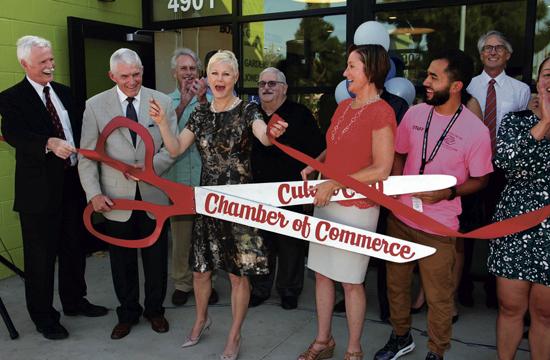 The Boys & Girls Club of Santa Monica hosted a ribbon cutting on August 30 to commemorate the opening of their new location at the Mar Vista Gar-dens housing project in partnership with the Housing Authority of the City of Los Angeles (HACLA).

Thanks to a $1 million donation by philanthropists Jack and Cindy Jones, voter approved Proposition K funding of $1.7 million administered by theCity of Los Angeles, and $256,000 in donations, the Boys & Girls Club of Santa Monica was able to open the new location as well as a community center,named for the donors.This location was four years in the making, “It’s unbelievable to actually see that this is the day that the doors are open,” said Cindy Jones.

The event opened with a performance by the Mar Vista Gardens Steppers, a dance troupe sponsored by the Boys & Girls Club of Santa Monica, before several speakers had their time to celebrate this great event, including Bettina Duval, Boys & Girls Clubs of Santa Monica Board Chair, Doug Guthire, Housing Authority of the City of Los Angeles CEO, as well as Jack Jones himself, who recounted his youth in his speech, comparing it to the youth of today. Jones went on to describe the state of children’s self-esteem today, and that it is important to have a sense of community, which he hoped would be found in this Boys & Girls Club location.“This building is going to be used to help eachMar Vista gardens child have the opportunity to reach his or her potential,” Jones explained, “Our children need to be prepared to compete and succeed in this difficult world. To change towards they hear in their head from ‘I am stupid, I am ugly, I am afraid’ to ‘I am intelligent, I am beautiful, I am a success,’ that is our mission here,” Jones said.

The Boys & Girls Club of Santa Monica MarVista Gardens location is available for children ages 6-18, as well as Mar Vista Gardens’ residents. It also boasts little league baseball, soccer, and basketball for all those interested. For more information, visitsmbgc.org/location/mvg.