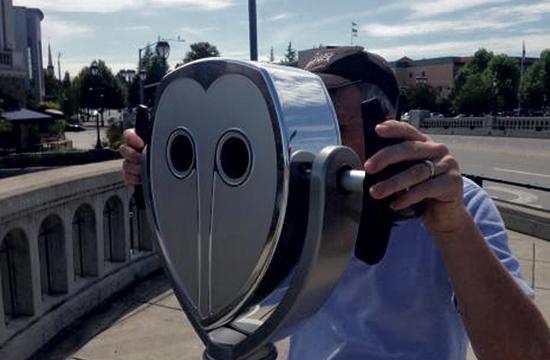 Inside the Owl, the public will be able to see how the beach and infrastructure will flood due to sea level rise coupled with a large coastal storm.

The Owl will also display potential solutions or “adaptation measures” being considered by the City of Santa Monica.The Owl will be available 24/7 and includes an interactive element that lets viewers share their opinions.“Sea level rise is a slow moving crisis that’s hard to see, and harder to get people energized around, but this technology will help bring it home in a very tangible way,” said Dean Kubani, Chief Sustainability Officer for the City of Santa Monica.

“Seeing firsthand how the change will impact us will be a very powerful experience for all of our beach lovers.”By 2050, sea level rise in Southern California could increase by 5-24 inches and by 17-66 inches by 2100. As the sea level increases, the water line will move up the beach, permanently eroding the beach. While the day to day impact may be mild, a further inland tide line can mean more impacts from major coastal storms, according to research being conducted by the City’s project partners,USC Sea Grant and the US Geo-logical Services.“From Malibu to the Port, sea level rise will impact local communities differently,”said Elizabeth Bar-El, City of Santa Monica Senior Planner.

“Future scenarios are informed by complex modeling, which are then incorporated into local plans to reflect he reality of climate change. It is very important to reach out in creative ways to help the community understand what it all means.”Bar-El is the project manager for the update of Santa Monica’s Local Coastal Pro-gram, which will incorporate future sea level rise into coastal zoning. Another City effort,the Climate Action & Adaptation Plan, will develop measures to adapt to risks and hazards posed to existing buildings and infra-structure.

The Owl viewfinders will be located on the north side of thePier, west of Bubba Gump Restaurant betweenSeptember 8 andNovember 7.For additional information about the Owland the City’s efforts to prepare and adapt to sea level rise, visitsustainablesm.org/climate.