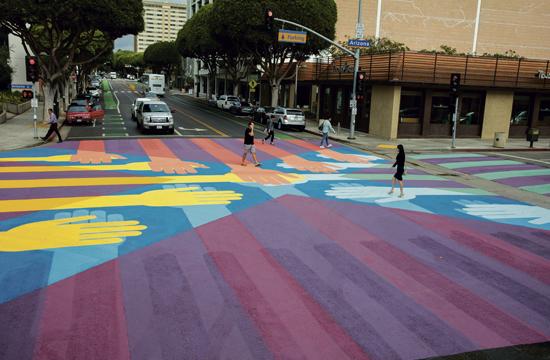 Creativity and community culture efforts took center stage Wednesday as Santa Monica City showed off a double-whammy of success in front of a small crowd gathered on the intersection of Arizona and 2nd.

Celebrating the bright artistry that now graces some of our city’s asphalt crossings, Santa Monica City Mayor Tony Vazquez stepped to the podium to announce the City as a recent recipient of the Robert Wood Johnson Foundation Culture of Health Prize which, along with prestige and recognition, comes with a $25,000 prize. According to the City, residents will be given the opportunity to suggest how the prize is spent, with a future initiative planned to collect ideas centered on social connections that are creative and flexible.

“This honor reflects our community’s decades long work to create a city that works for everyone, especially the most vulnerable,” Mayor Vazquez said.

“From increasing the minimum wage and our hands on approach to addressing the homelessness to using data to measure the well being of our community, building a culture of health is part of the Santa Monica ethos.”

The colorful crosswalks aimed at reflecting community values and culture can currently be found on Arizona and 2nd, and Ocean and Broadway. The City said that following community feedback on the two pilot-project designs, decisions will be made as to whether more will be created in the future.