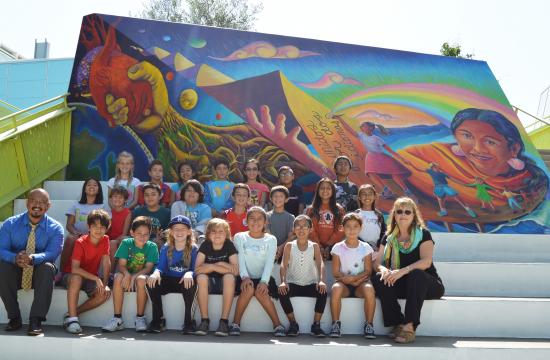 School of Choice, is one of 279 public and 50 private schools receiving this honor in the nation.

Schools are nominated for the award by the state department of education, and then complete a comprehensive application about school practices. Edison was recognized as an Exemplary Achievement Gap Closing School — schools making the fastest progress in their state in closing achievement gaps among student subgroups.

This year marks Edison’s 30th year as a dual immersion school, where all students learn to understand, speak, read and write in both English and Spanish. Edison is the first step in SMMUSD’s Language Academy and its students can continue studying in two languages at John Adams Middle School and Santa Monica High School. The school follows the same state curriculum frameworks and grade level content standards as all public elementary schools in California – with the addition of also learning a second language and learning about the cultures of the Americas.

One of the many factors that Edison was evaluated on was the performance of third, fourth and fifth graders on the California Assessment of Student Performance and Progress (CAASPP) in English and math. Edison has shown tremendous growth in state assessment exams over the last decade, with particularly strong scores for its fifth grade students. This mirrors national research showing that it takes 7-9 years of systematic instruction to approximate native-like proficiency in a second language. The fact that Edison, a schoolwide Title 1 school, has been able to achieve this growth while at the same time dedicating so much instructional time to Spanish is especially noteworthy.