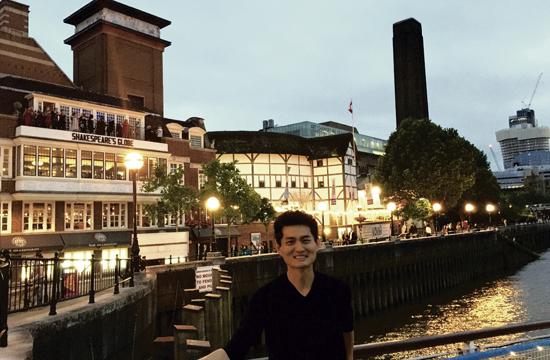 Initially believing he wouldn’t receive the grant upon applying to the fellowship, the opportunity proved to be a dream come true for Lee.The participants followed a rigorous schedule of working with practitioners from the famous Globe theatre, learning about and performing Shakespeare while relishing the intricate architecture of the Globe theatre as well as the adjoining, candle-lit Sam Wanamaker Playhouse.

“They kept repeating a phrase: there’s the actor,there’s the audience, and then there is the architecture,” Lee said. “The Globe is one of the few theatres in the world where you have to make sure you’re able to see, convey, and digest all three…because it’s so visible.”

Daily activities with practitioners took up the bulk of the schedule. These included voice and rehearsal workshops as well as textual analysis to better grasp the meaning of individual Shakespeare texts.

Additionally, each fellow worked with an individual director to practice performing a scene from Shakespeare’s “A Midsummer Night’s Dream.”

The program culminated in a final showcase of each of these scenes on the Globe stage.“I would say the most memorable and special moments were when we were on the Globe stage rehearsing, practicing, and performing,” Lee said.

“That theatre is so special, not just when you’re watching the plays, but when we had the opportunity to be performing on there.”Lee also had the opportunity to watch actor Ralph Fiennes and actress Vanessa Redgrave in“Richard III” at the Almeida Theatre, as well as Sir Derek Jacobi in a performance of “Romeo and Juliet”at the Garrick Theatre.

“Watching these Shakespearean performances really instilled me to further help young people make an emotional connection to the text in order to create a safe space to explore playing a Shakespearean character,” Lee said.

As he gets back into his teaching groove this year, Lee says he will take away the fellowship’s different drama-based activities that helped him better connect with and understand Shakespeare’s texts and apply them to his English classes at Samo High. Even in the first week of school, Lee challenged his classes with activities such as storytelling tableaus and partner games that got the students moving, rather than sim-ply reading the texts.

“You have to get everyone involved, up on their feet playing out the part as much as possible, or else he language is kind of flat,” Lee said. “I would say that was the top thing, infusing as many performance-based games and hands-on activities to make it appropriate for [the students] to understand the language.”

According to Lee, his time at the Globe was like visiting the “Shakespeare mothership,” describing his experience as the perfect opportunity for someone with a double major in English and Comparative Literature with a focus on Renaissance Shakespeare.“It was truly a magical experience, like a dream come true, and I had to kind of pinch myself many times like ‘Wow, this is really happening,’” Lee said.