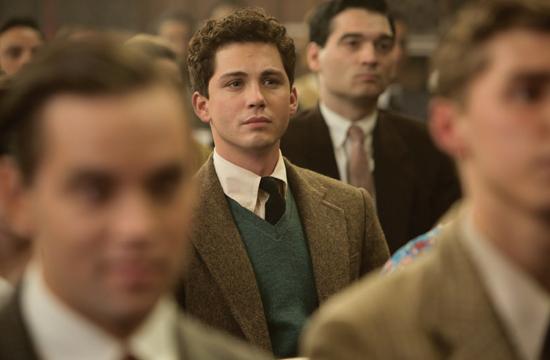 “Indignation,” a movie set in the early 1950s and based on a novel by Philip Roth, centers on the sexual awakening of a working class freshman college student named Marcus Messner, who has high intellect, but little experience with female relationships. Logan Lerman plays the young man, one of the few Jewish students at a Midwestern Christian school. By enrolling in college, Messner was able to get out of serving in the Korean War. The film explores his adjustment to campus life and courtship of an attractive coed named Olivia Hutton, played by Sarah Gadon. Hutton has emotional and psychological issues, which she tries to hide from Messner at first, for fear that he will reject her.

The movie has mature thematic material looking at issues of identity, religion, and adult sexual matters. Even though he is technically Jewish, Messner sees himself as an atheist and makes this clear in a classroom setting and in a heated discussion with the dean. The scenes between Messner and the dean, played very well by Tracy Letts, are some of the best in the movie, as they show two highly intelligent minds going at it over their philosophical differences. Messner thinks that the dean is expecting too much out of him and prying unnecessarily into his personal life. Later in the movie, Messner resents having to attend chapel at the school, so he tries to find someone to take his place and pretend to sign in as him. As his dad tells him early on, “One little mistake could cost you.” Hutton, on her first date with Messner, is able to provide him with the first kind of sexual pleasure that he has ever had. Messner is confused, ashamed, and elated all at once after this sexual encounter has taken place, even attributing her actions to the fact that her parents were divorced. This being the early 1950s and coming from his sheltered background, it is understandable how he would have had conflicted emotions.

Hutton is gentle in her interactions with Messner, trying to put him at ease, yet at the same time very talkative, trying to get him to open up about himself. She, on the other hand, is very careful and selective about what she reveals about her past.

Lerman, in a moving performance, is able with ease to convey Marcus’ struggles. Gadon also impresses as someone who is scarred emotionally and desperately wants to please and be accepted by Messner. Even though Messner sees her as confident, she says that she anything but that, and Gadon makes that come through in her dialogue and body language. The two of them, both vulnerable in their own ways, have good chemistry together. The script is filled with intelligent dialogue, while the look of the movie is completely reminiscent of the 1950s era.

This is old-fashioned moviemaking at its best – a film that feels like it could have actually been made in the 1950s and I mean that as a compliment, as it evokes the socially-conscious pictures of that era.