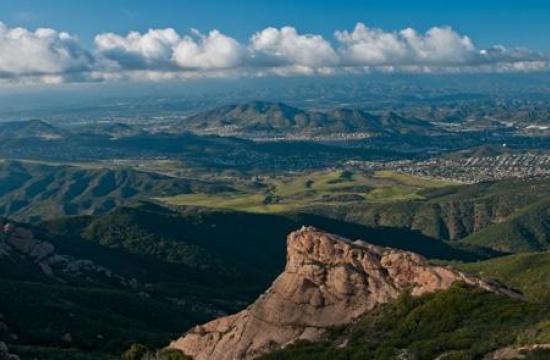 Not surprisingly given its proximity to the Los Angeles area, the Santa Monica Mountains National Recreation Area suffers from high levels of light pollution that not only affect nighttime views of the sky, but also can disrupt wildlife ecosystems, according to a study released today.

The study, which examined satellite data over the past two decades to estimate changes in light pollution at various national parks, found some decreases in light pollution in select parts of the Santa Monica Mountains range. But researchers noted that the park has been at the maximum level of light pollution since 1992 along its borders with Los Angeles, so it was difficult to determine if the level in that area has increased.

"The good news is that we now have a baseline measure of the lighting conditions within Southern California’s coastal national park units," said Tom Gillespie, lead author of the study and a UCLA geography professor. "Now we can work with people in the cities in the surrounding regions to decrease their contribution to the problem and conserve night skies.

"Rarely are ecological problems remedied this easily, through small actions by large numbers of people," he said.

National Park Service officials said the study is the first step in a long-term effort to monitor light pollution in national parks and establish a methodology for continuing study of the issue.

"There have been many studies showing that artificial light disrupts ecosystems," said Stacey Ostermann-Kelm of the Mediterranean Coast Network Inventory and Monitoring Program, which monitors the ecological health of the parks. "The orientation of animals moving across the landscape and the timing of seasonal and daily activities such as breeding and nesting of birds can be influenced by night lighting."

The study found that there have been some drops in light pollution in some interior areas of the Santa Monica Mountains and Simi Hills, while some increases were detected around the edges of the park, in the Conejo Valley, along the coast and in western Malibu.

Decreases were likely the result of nighttime-lighting restrictions in areas adjacent to the mountains, according to the study’s authors.

The study also found that light pollution has decreased over the past two decades in the Cabrillo National Monument in San Diego and remained extremely low in Channel Islands National Park.