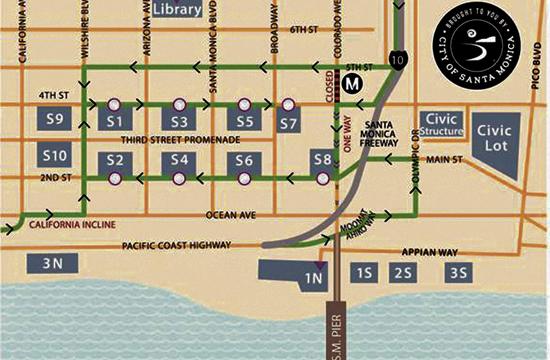 New turn restrictions on 2nd and 4th Streets began installation Wednesday as part of the City’s effort to keep traffic flowing, Santa Monica City announced this week. Delineators will be installed along 2nd Street and 4th Street in front of each parking structure to restrict left turns.

“As part of the City of Santa Monica’s efforts to reduce gridlock in the Downtown, delineators restricting left had turns out of Structures 1 through 8 will begin installation,” the City said.

“These parking garages will now be accessible via right turns from northbound 2nd Street and south bound 4th Street.Left turns at Structures 2 and 4 will be allowed each Wednesday during regular Farmers’ Market hours.

“Additional signs will be added to direct drivers to parking garages as shown on the map above,” according to the City.

The changes are part of the City’s Go With the Flow traffic management program as well as recent efforts to try new approaches to reducing congestion throughout the Downtown district, the City said.

For more information onGo With the Flow, visitsmgov.net/portals/gowiththe-flow.