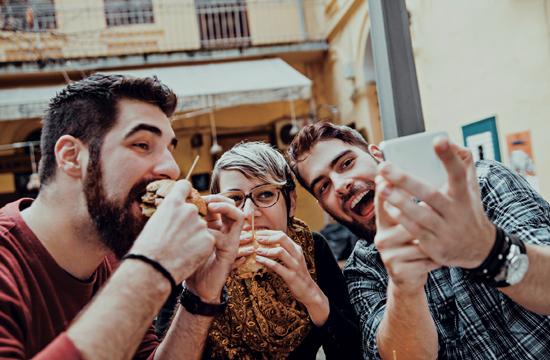 Full Disclosure: I still carry a “clam shell” type cell phone. Yeah, it has a camera feature but I’ve never figured out how to get the photos out of it and the pictures are hardly the stuff of current iPhone technology. However, if I wanted to get a fuzzy shot of Bigfoot that might help promulgate the myth of the creature actually walking around somewhere… I’ve got just the phone camera for it.The entire “selfie” ethos has brought with it a new interpretation of the old hippie axiom “Be here now.”

There seems to be a new aesthetic that dictates that something did or did not happen to you depending on whether there are selfies to prove it. If you happened to run into a candidate for President or a pop star, your telling friends about the encounter might carry some weight. But if you have a shot of yourself near enough the celeb to grab the coveted selfie… then, by God… you were there.

Those critical selfies as narcissistic or just plain silly were dealt something of a setback recently when a study at the University of California, Irvine found that taking selfies and sharing them with friends can actually help make you a happier person.

The lead author of the study says that smartphones reduce stress and that taking and sharing photos of certain types of images (you and your friends hanging out) can help students fight depression and increase positive feelings. I’m not the lead author of a study, but I would posit that the selfie experience likely divides itself into three specific actions. There’s the first one, which is gathering up everybody present and having them lean in to be included in the shot.

That’s fun, as everyone is about to be officially recorded and reported as being on scene and in a good mood.Then there’s viewing the shot, mere seconds after it was taken. Previous to this, the only real system we had for reviewing the moments we just lived was to say something stupid, then have somebody call us on it, then apologize.

Then there’s the third part of the experience, which is what to do with the photo once it exists. Blessedly, social media exists and allows us to share our selfies.

But to what end exactly, I’m not certain. There can be implications inherent in posted selfies ranging from “We are here, having fun without you” to “Behold the wonders of our vacation. How is everything back in Palmdale at the soup kitchen?” to “My wife and kids are pretty good looking, don’t you agree?”

Of course you do. Consider the selfies posted to show off a new baby. Comments underneath the post will invariably confirm that the infant is beautiful and everybody is very lucky. You will rarely see any grousing about diapers or building a college fund for the new arrival. I’m still hopeful that one da an ex-boyfriend of the mother of the baby will comment, “That was supposed to be our child, Leslie…” But then, I’m a writer and I like drama. As a man of a certain age, I’ve noticed a tendency on Facebook to post photos where a certain amount of preparation and tidying-up of similarly aged friends results in a shot that is extremely flattering to those pictured. (Let’s call these “Old Baby” photos.”)

Again, rarely is there much in the way of critique or review. “You two look fantastic! Happy Anniversary!” is about as harsh as the comments will get. Although there can be the occasional creepy comment, such as “Your wife really looks great. I mean, really great…” And the next day, somebody is quietly “unfriended.” Are selfies changing human behavior and interaction? In the days when dinosaurs ruled the earth and TV sets showed us life in black and white, we waited about a week to get our pictures back from the drug store or Fotomat. Only then could we confirm that we had, in fact, had a good time on Thanksgiving and that some of us looked pretty good.

Now, the feedback is instantaneous. If you were concerned that a certain clothing choice made you look too fat or nerdy… your confirmation is available minutes after the first box of wine has been opened. Along with those increased positive feelings cited in the UC Irvine study, I suspect that a new level of acceptance is settling in as digital photography integrates itself deeper into our everyday lives. There’s a new relaxation about being photographed, which used to make a lot people uptight back when people actually used the word“uptight.” Now there’s something more akin to “This is what I look like and everybody is taking all these damn pictures with their phones so…you might as well get over it.”

I still maintain that our obsession with checking our phones for messages is a form of self-love wherein we must know how many people need to get in touch with us right now! Selfies may also be related to our anxiety over whether we are loved and needed enough, but there is a bigger shoe dropping in about 20 years. Because it will be then that everyone who was young and beautiful back in those selfie days will be buried in file after file of photos confirming with pixel-perfect accuracy that that was then and this is now. Although by that time, I fully expect there will be an app that makes you look young again in any recent selfies that say otherwise.