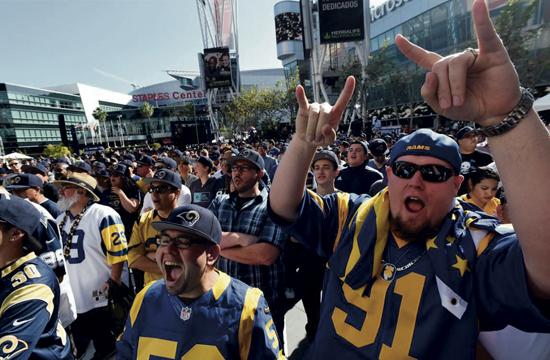 Dear NFL: It’s clear we love you. Witness our outpouring of faith on Sundays when it’s time to watch your muscular confrontations. Witness our consumption of every NFL-related fan item… from drinking cups to blankets to NFL emblazoned gear for infants. Behold how we bend for your every need when it’s time to build a new stadium to support you. And for our love, we are given back…

Pricey season tickets, bad behavior by players including assaults on women, player drug problems, complaints that become requests for larger stadiums financed on the back of taxpayers, black-outs of TV coverage meant to jack up your ticket sales, and the ever present threat that if you don’t get what you want you will pack up your toys and move to another sandbox. (Shout out to the citizens of St. Louis…)

All of the sparkling personalities at L.A. ABC TV affiliate KABC are currently seen in teaser promo spots with the Rams mascot “Rampage.” The same team of on-air faces that report to us on real rampages in Los Angeles often involving guns and violence seem perfectly comfortable promoting the physical abuse that is the game of professional football played for our entertainment.

Unlike so-called “professional wrestling,” football players try to hurt each other for real. And of course, get paid for it. Sometimes extra, such as the New Orleans Saints scandal dubbed “Bountygate” in which bonuses were paid for “Saints” who injured opposing team players. This system was said to be in place from 2009 to 2011. None of the “hits” in question were ever penalized or deemed illegal by in-game officials.

But one can talk about the faults of any industry (such as tractor-trailer trucks driving too fast for safety on our highways) and still not make a convincing argument that said industry should simply close-up shop. Baseball survived the use of steroids, rock music survived the use of drugs, the food industry has dealt with too much salt in your snacks, and the dairy industry got a hold of the adding of rBST. Life goes on.

So I’m not advocating, for right now, that we attempt to remove professional football from the American bloodstream. But I would like to highlight the distinction between cities and fans being asked to bend over and touch their toes to get pro football… and then being asked to grab their ankles.

Inglewood wants and arguably “needs” the new Rams stadium. There’s always the argument that more business is better than less business. But little if any thought has gone into exactly what the traffic problems are going to be. As Michael Hiltzik pointed out in the L.A. Times this past Wednesday, that new stadium could be a milestone around the neck of Inglewood for years. According to Hiltzik, “taxpayers will be on the hook for unspecified “public services and infrastructure” “ and the economic gains Inglewood hopes to see from bringing the Rams to town will be eroded by the costs of traffic control and police and fire protection for those attending the games. All that will come out of Inglewood’s share of the revenue.

Since so much is still unknown about the total costs, monetary and otherwise, of bringing the Rams to LA Hiltzik instead focused on gotta-have-the NFL efforts in Las Vegas and San Diego.  Both cities are being pressured to build new stadiums but the numbers suggest possible boondoggles in both cities. In reference to that pressure, casino magnate Sheldon Adelson (Forbes estimates he’s worth $28.7 billion) has called a football stadium for Las Vegas a “must have.” Does he know the city already has a pyramid and a pretend Paris? In San Diego, the city is already carrying $50 million in debt from a 1997 renovation of the Charger’s existing Qualcomm Stadium.

Underneath all of the huge numbers lies a comfortably slumbering belief that having an NFL franchise is always… always… good for a city. There’s a warm glow that emanates from big sports franchises that seems to bond one citizen to another, as though America may not have resolved individual conflicts of faith or family values but it knows for a fact that pro football is a worthy addition to the experience of life. It’s good, it’s American, and by golly it’s fun to watch.

And yet, as a citizen, I had absolutely nothing to say about the Rams coming to L.A. I’ll eventually be mired in Rams game traffic, Rams fever in its many forms, and be asked at some point if I’m pulling for the Rams. I’m not pulling for the Rams, or the bullying that accompanies the movement of NFL teams to another city in search of one thing: Money.

I grew up in Wisconsin, where the Packers are literally owned by the people of the state. Over time, this appears to have induced some decent behavior on the part of the team: The Packers have never threatened to leave Green Bay. I lived in Denver for 12 years and in that city the fever for the Broncos can match that of flesh-eating zombies for fresh dinner. With a reasonable amount of dignity, that team has paid its fans back with championships and an above-average level of decent behavior on the part of the players. I don’t know if the Rams will return our love if we give it. For right now, I think Inglewood would be happy if they just delivered on the investment.