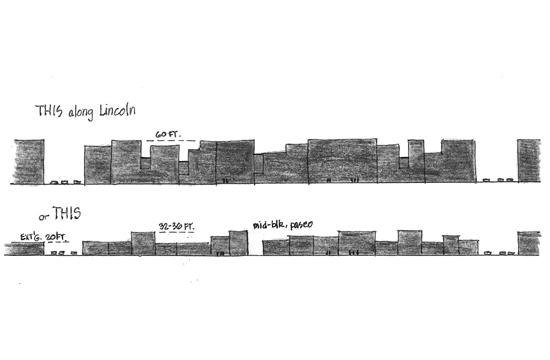 Santa Monica’s Downtown is unique in that it is contained on three sides with cliffs to the west, deep canyon to the north and the Santa Monica Freeway to the south. This limits access to and from the center of our City. Since most major arteries terminate in Downtown, there are few ways for residents to escape the inevitable gridlock.

Ironically, the Expo Line, that was supposed to reduce traffic, is having the opposite effect due to new Expo gate crossings and pedestrian “scrambles.” The fact that some of our major north/south arteries have had lane reductions and/or are now “one-way” hasn’t helped.

Although the City has tried several strategies to improve traffic, the results have not been promising – our streets continue to be jammed during peak hours. Currently, the number of cars in the Downtown area exceeds the capacity of our streets to accommodate them…. and it is getting worse. Large projects continue to be approved despite the fact that our roads, resources and infrastructure are inadequate to support them. Our Planners need to get ahead of the curve. They need to stop approving projects until their remedial measures can be shown to be effective.

For example, it would seem that good planning would reduce rather than increase the number of permanent cars in the Downtown area. Actually, the opposite is the case. Of the 55 Development Agreements in the pipeline, about two-thirds of those pending or approved are slated for Downtown and two-thirds of those will be on Lincoln Boulevard.

These new projects will require parking for around 8,560 new cars – almost as much as currently exists in all of the City’s 14 lots – 8,683 cars. Added to this number will be the cars for 1,000 new hotels rooms. What has been until now an inconvenience is about to become a nightmare…. and perhaps an unending one. If the past is any indication, the solution does not lie in better traffic control, more parking structures or traffic cops. There is a much simpler solution, and it may be the only one that can affect a meaningful change – a cap on development.

This is particularly important in the Downtown area but could also be considered in other parts of the City as well. At present, what we are witnessing is the opposite. Our infrastructure has become strained to the point where “brownouts” are more common and our goal for water self-sufficiency less likely. Our schools are full and some emergency services are understaffed and ill prepared for the increasing number of residents and visitors. Simply stated, Santa Monica, for now, may have reached its “Limits to Growth.”

Over the 25 years, from 1985 to 2010, there were fewer than 10 moderately sized projects that exceeded Santa Monica’s codes approved with Development Agreements. In the six years since 2010, there have been nearly six times that number – 57. On average, the more recent ones have all been much larger.

These new projects go far beyond what our city fathers envisioned when our planning code was written. Most (67 percent) are planned for Downtown with 30 percent of those on our most congested artery – Lincoln Boulevard. If all of these projects approved by City officials come to fruition, the fate of our City may be sealed. It will not be what most residents would have preferred. Something must change before Santa Monica becomes a second Playa Vista that can be seen mestasizing like a cancer along Jefferson Boulevard. One justification for this rush to develop using D.A.s for projects that exceed current codes is the need for affordable housing. Most of the large mixed use projects under review do have a small component of “affordable housing” – 14 percent on average.

This housing consists mostly of one-bedroom or studio units that are smaller than a two-car garage. Like garages, they are often located in the least desirable part of the project. These units are unsuitable for families. Their primary appeal is to a transient workforce that will have little stake in our community. Most couples with children would not want to live far above the street where they are unable to monitor their children below or so far from their car when it comes time to take their kids to school or run errands. It’s not a coincidence that nearly half of these projects are financed by out of state investors?

Their goals are short-term, their motives profit driven and their outcomes often not in the community’s best interest. The paltry development fees and micro units fall far short of compensating residents for their inconvenience and future costs.

Sometimes, these projects are built in low-income areas where they displace existing affordable housing and accelerate gentrification. The City

needs to find a better way to provide affordable housing that is low-rise, suits families and is located adjacent to parks and schools.

To do otherwise, will be counterproductive in the short term and detrimental to the City best interests in the long term.