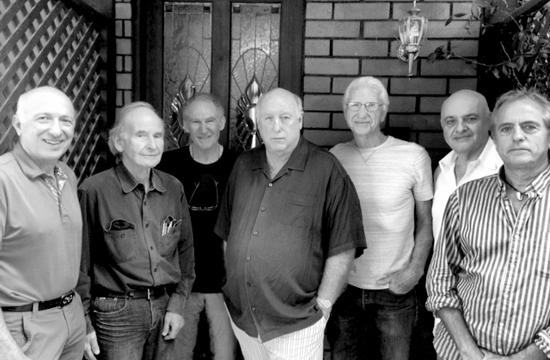 I was surprised to read an article recently that stated Wilshire Boulevard was in desperate need of height and density. According to the author, it is not a “complete street” and needs “appropriate development.” His interpretation of Santa Monica’s LUCE envisions three- to five-story buildings stacked from the east end of Wilshire into downtown. According to his commentary, we must all be failures, as we haven’t “built out” the boulevard. He suggests that Wilshire can’t possibly be desirable as a street of small shops for daily tasks – it might only reach success with mid-rise mixed-use buildings. “How strange,” I thought after I read the piece. I didn’t realize Wilshire was such a wasteland… a desert of empty shops that nobody walks to.

That thought prompted me to look back at my family’s history and our connection to Wilshire Boulevard. My grandparents moved to 12th Street in the 1930s. My mother walked to school at Jefferson, Madison and then Lincoln each morning under my grandmother’s watchful eye. Grandmother walked to Vons each afternoon to get a piping hot loaf of Pioneer sourdough bread. My family used the Will Rogers Post Office, walked to See’s Candy, bought ice cream at Baskin Robins, ate breakfast at Callahan’s, shopped at Mart Furniture and used the dry cleaners and laundromat. My grandfather was a butcher at Ralphs on Third and Wilshire and later at the A&P Market at Wilshire and Berkeley. My mother worked at Jeffrey’s Hair Salon on 10th and Wilshire. On Thursday nights, when my mother worked late, I walked to KFC, A&W or H Salt to get dinner. Later, I opened my first bank account at First Federal Savings on 4th and Wilshire. My significant other waitressed at the Feed Bag before I knew her and I bought jeans at Tex’s and The Corral. Many celebrities started their careers waiting tables and singing at The Great American Food & Beverage Company. I ate often at the Broken Drum. My grandparents danced each New Year’s Eve away at a restaurant on Wilshire.

So, I take umbrage with the gentleman who disparaged Wilshire. The area between Montana Avenue and Santa Monica Boulevard is a densely populated apartment zone with their services on “Mr. Wilshire’s” Boulevard.

I took a fresh look at my family’s neighborhood street this week. I walked the blocks my mother still walks daily with her dog “Sandy.” I spotted thriving Ukrainian, Persian and British markets. I noticed our neighborhood Jewish Deli full of customers. I walked by a Mexican bakery with people using its sidewalk tables, and glanced at the busy bakery where I’d once bought a wedding cake. I peered into Ingo’s Tasty Diner, the successor to Callahan’s – modernized yet with an ode to the restaurant that’s always been there – a great, fun adaptive reuse. I watched people enter our neighborhood sushi bar and our local pizza joint. A bright bicycle shop now occupies the adaptively restored movie theatre where I used to watch double features each Saturday. A pet clinic, beauty salons, a children’s salon, two mattress stores, a travel agency and “dueling” donut shops are on this street. The Vons is still there, as is Rite-Aid (once J.J. Newberry’s and Rexall Drugs). Two banks, a TV store and a new exercise facility all exist within four blocks.

Funny…from what I described above, I might think I was in a lively neighborhood in New York City or London instead of “downtrodden” Wilshire. Because my family has walked, shopped, dined and dreamed on Wilshire, I see it as the most important neighborhood-serving street in our town. Most of its businesses are not destinations for our daily influx of tourists and office workers…they are there to serve our residents. What a concept –­ shops that serve the people who live here.

We are an incredibly dense place, yet many architects, developers and institutional speculators who have no real roots in our city want to pack in even more growth. They don’t see the history of our glorious town because, frankly, that history carries no dollar signs for them. I walked Wilshire growing up. I attended Madison, Lincoln and Samohi. I took my first date to the Newberry’s counter. I was honored to connect many mornings with one of my past students and her salt-of-the-earth immigrant family at Callahan’s. Decades ago, I even had a root beer float prepared by Mr. Callahan himself. I met “Little Oscar” at the A&W. There’s something great about walking a street where there are small, independent retailers, restaurants, insurance agents and donut shops.

Of course, Wilshire can be improved. A local assessment district could be created. Strategically placed small footprint, mixed-use, three-story buildings can be added. More sidewalk seating and additional green space are needed. The declaration that neighborhoods cannot exist without continuous rows of five-story buildings replacing longstanding successful “Mom & Pop” businesses, is dead wrong. Those same advocates looked at the Vons Market property as an “opportunity site” for a 500-car underground garage and a six-story, massive apartment development. Many who live in the Wilmont and Mid-City Neighborhood saw that proposal as a “community detriment” with no benefit.

The services that residents need for their daily lives are on Wilshire – the spots where they eat, shop and breathe. Wilshire has served three generations of my family as it now serves residents who live in the surrounding apartment buildings. Preserving our neighborhood’s character and soul must be our highest civic priority.