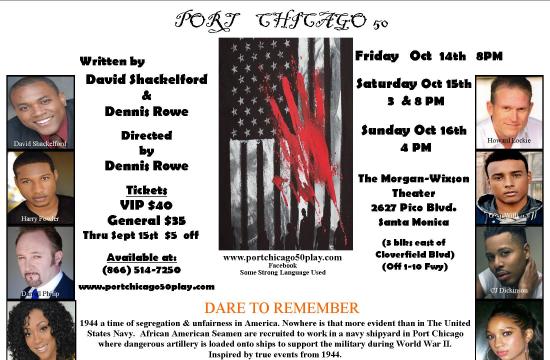 Port Chicago 50 is a story of love for Country, the American Dream and a quest for Equality and Fairness.

Port Chicago is a must see for everyone! Not only will it be a weekend of historical enlightenment but also a special time of entertainment on the anniversary of the event.

The performances are at the Morgan-Wixon Theater, 2627 Pico Blvd, Santa Monica, CA 90405. The theater is on the north side of Pico Boulevard at 27th Street, three blocks east of Cloverdale and eight blocks west of Centinela Avenue.

The production is produced by Dennis Rowe Entertainment/Productions.