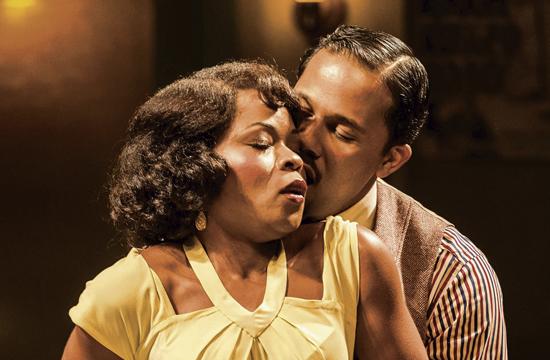 Playwright August Wilson has been one of the most compelling voices in illuminating the African-American experience. He received two Pulitzer Prizes for the ten plays in “The Pittsburg Cycle,” which began in 1904 with “Gem of the Ocean.”  The other plays were: “Joe Turner’s Come and Gone,” “The Piano Lesson,” “Seven Guitars,” “Fences,” “Two Trains Running,” “Jitney,” “King Hedley II,” and “Radio Golf.” “Ma Rainey’s Black Bottom,” originated in 1927 and to say the play has travelled well is evidenced by its current riveting revival.

Brilliantly directed by Phylicia Rashad, the play takes place in a recording studio in 1927.  The owner, Sturdyvant (Matthew Henerson) is uneasy as he prepares the sound booth for a session with Ma Rainey, (Lillias White) an imperious diva who puts the “D” in diva.  She knows she is the first black singer to be signed to a white label and takes full advantage of that position with an unending list of demands – some reasonable, some unreasonable.  She arrives way behind schedule later in Act I.  She is accompanied by her girlfriend, Dussie Mae (Nija Okoro) and her stuttering nephew Sylvester (Lamar Richardson), who she insists that he be the spoken voice for the opening introduction on the record.  There is a glitch, however, as she’s brought in by a policeman (Greg Bryan) who wants someone to verify that she is whom she says she is.  There are several charges that could be brought against her, but money passes hands and the officer leaves assuring her manager Irvin (Ed Swidey) that “I’ll take care of everything.” Her demands are unending and at one point, she refuses to begin recording until someone brings her a coca cola. Irwin does everything he can to assuage the bosses’ anxiety while at the same time trying to satisfy “The Mother of the Blues.”

While you may think that “Ma” is the centerpiece of the play, Wilson’s brilliant writing actually gives his voice to members of the band who begin arriving for a rehearsal.  They unpack their instruments, and much like any bunch of guys getting together, engage in playful banter and teasing using the popular idiom countless times in referring to each other.  Keyboard player Toledo (Glynn Turman) is the oldest and perhaps the wisest of the group.  It’s his voice that predominantly illuminates the historic oppression of blacks and as a black what you had to do to function in that world.  There are silly little discussions such as the position of a door.  Was it there before or not? Good-humored insults fly back and forth, “I’m going to ignore you because you’re ignorant” or “Unlike you, I got talent.” Observing all the banter while playing solitaire is easy-going bass player Slow Drag (Keith David.)  He avoids commenting too much and just wants a reefer which he reluctantly shares with the band’s leader, trombonist Cutler (Damon Gupton.)

Trumpeter Levee (Jason Dirden) is the youngest and the last musician to arrive. He is carrying a shopping bag and takes out a box containing a brand new pair of black and white shoes that he bought with his last paycheck together with winnings from a crap game with Cutler. He’s proud of those shoes but takes a lot of flack, especially from Toledo, which eventually comes home to roost in a most unexpected way.   Although the entire play is filled with laugh lines, two of the funniest moments are when Toledo, after making fun of Levee’s shoes, tells him that not only is he not able to play music, he can’t even spell it and a $1 bet is made.  Levee spells it out – Musik – and he is told “It’s music with a “C” (uses vernacular word) not K!”  The other bet is for $5 and it’s for whether or not he knows “The Lord’s Prayer.” Insisting that he does, Levee begins to recite, “And now I lay me down to sleep.” This time Toledo hands him the $5 bill.

A heated debate ensues, spearheaded by a rather arrogant Levee. It revolves around his opinion that the current arrangement of “Black Bottom” is dated and he updated it to reflect the changing musical tastes of the younger generation.  Cutler repeatedly reminds him that he has to play the chart as written because that’s what Ma wants and whatever Ma wants she gets.  Levee, a ticking time bomb, boasts that he’s written his own songs and is going to form a band.  In response to his threat to leave the band, Toledo says: “He ain’t gonna’ quit.  He needs that money to keep him in shoe polish.”  With exquisite writing and directorial timing, occasionally the musicians cease their bantering and with Toledo at the piano, play a piece of music which always begins with Cutler saying, “Uh-1, and Uh-2, you know what to do.”   While so many plays fail to have a strong Act II, Wilson keeps driving the action forward at a steady pace with surprising revelations and a dénouement that will have you almost jumping out of your seat.

What is most compelling about Wilson’s work is, through his dialogue, he deftly infuses the rampant racism suffered by blacks, not only in the exploitative music business, but also in society at large.  The playful, sometimes hilarious repartee between the characters goes much deeper than the comedic surface.  Each member of the band ultimately reveals a haunting story of his suffering at the hands of the white man, with Levee’s story perhaps the most riveting and tragic.  Even Ma knows she’s being taken advantage of which is why she makes ample use of her star power to disrupt proceedings with unending demands whenever and wherever she can.  She is well aware that the people making money off of her recordings really don’t understand the blues.  For her, “The blues helps you get out of bed in the morning.”

What is particularly dazzling about this production, is that under Rashad’s commanding direction, each and every member of this remarkable ensemble delivers a captivating, masterful performance.  With all the laughter throughout the play, we never lose sight of Wilson’s intention – to theatrically shine a bright spotlight on racism and its profound effect on the African-American community, which sadly, is as prevalent in the fabric of today’s America as it was in the Golden Age of Jazz.