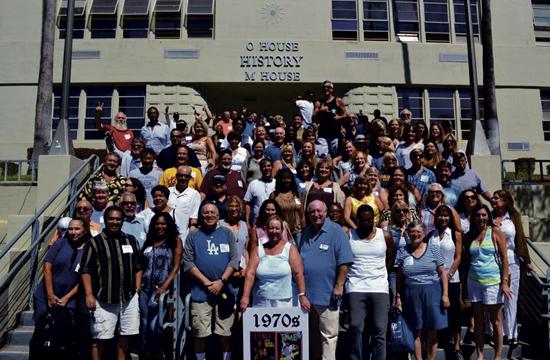 In honor of the 125th anniversary of Santa Monica High School, alumni from all past graduating classes were invited to gather in Samohi’s quad for an afternoon of food and school spirit last Saturday.

Attendees were invited to take tours of the campus and watch performances by the school’s current athletes, band and cheerleaders. At the end of the event, “Spirit of Samohi” awards were given out to John Lonsdale (class of ‘44), Liane Sato (class of ‘82), Becky Darden Mejia (class of ‘58), and James “Mac” MacPherson (class of ‘55.)

Alongside the afternoon festivities, alumni had ample opportunity to reminisce about their high school days, and what they’ve been up to since.

“I’ve been coming back here since 1990 and I enjoy meeting a lot of old classmates,” said Don Davis, class of ‘51. Davis is now 84 years old, and a Korean War veteran, having served six years in the Marine Corps.

While Davis enjoyed connecting with his fellow alumni, he was the only attendee from his graduating class.

“I guess they’re getting too old,” said Davis.

Also in attendance was former mayor and longest serving city council member Bob Holbrook, who was a student at Samohi in ‘57, ‘58 and ‘59. He recounted a story about the filming of the classic James Dean film, “Rebel Without a Cause.”

“I’ll never forget, that we have a seal [on campus], and if you stepped on the seal you had to stop and polish it with a rag. They noticed that, so they wrote that into the movie. James Dean, at his first day at Samohi stepped on the seal, as part of the script of the movie,” said Holbrook.

Many of the attendees, who packed the school’s quad, were older in age, but thanks to active involvement by current day students, either performing or providing food and drink, a youthful spirit pervaded the event.