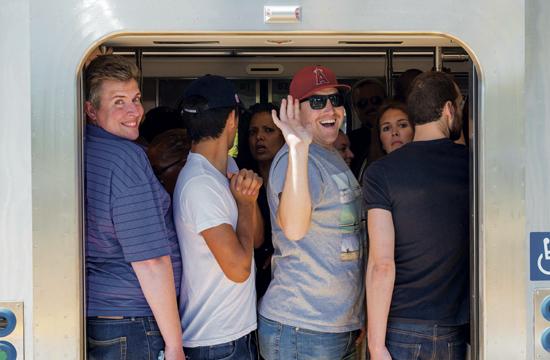 Since the opening of Expo Line to Santa Monica in May, ridership has grown to nearly 45,000 average weekdays boarding, with about 20,000 attributed to the new Culver City to Santa Monica segment.

With a projection of 64,000 average weekday riders by the year 2030, the light-rail line has achieved almost 70 percent of its target after three months. The number of boardings on Sunday has already doubled after the opening to Santa Monica.

About 1,000 Expo Line riders were interviewed as part of the survey between June 7 and 12 at the seven new stations and the existing Culver City station.

The survey is being used to understand ridership trends and compare Expo rider habits before and after the extension opened.

The survey also shows that 50 percent of riders walk, bike or skate to reach stations, including the stations with parking available. Sixteen percent of those surveyed said they drove to stations, 15 percent took the bus and nine percent got rides and were dropped off at stations. Only three of the seven new stations have parking.

The majority of existing riders surveyed at Culver City station used the Expo Line to travel east toward downtown Los Angeles, while two-thirds of new riders travel west to Santa Monica. Overall, existing riders tend to be regular commuters, while a significant percent of new riders are occasional Expo users.

In general, riders said they feel safe on the Expo Line but are concerned about low frequency of service, saying it leads to overcrowding