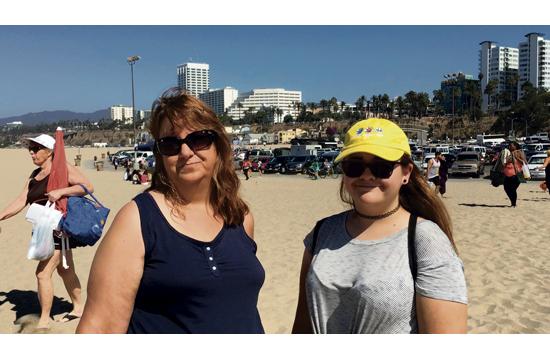 Saturday, September 17 was International Coastal Cleanup Day. In recognition of this worldwide event, the Surfrider Foundation partnered with Parley for the Oceans and Heal the Bay to organize a cleanup of the beach just north of Santa Monica Pier.

“Coastal cleanup day is an incredibly important movement. It’s a global collection of people on one day who all come together through a call to action… to make sure our beaches and oceans remain clean and get cleaner,” said Joel Cesare, who is the Vice Chair of the West L.A. and Malibu chapter of the Surfrider Foundation.

Similar to the beach cleanups organized by Heal the Bay throughout the Westside, volunteers were provided with buckets and tasked with gathering as much refuse from the beach as possible. Dozens of participants, wielding either tan buckets provided by Heal the Bay or their own receptacle brought from home, could be spotted amidst regular beachgoers along the coastline.

“The plastic bag and the plastic pollution of our oceans and beaches is reaching a catastrophic level, and it’s really important that we have these moment where the entire globe can come together and recognize that it can be solved,” said Cesare

Additionally, restaurant chain Rubio’s Coastal Grill and the Cancer Treatment Centers of America network of hospitals set up tables at the event, along with the Surfrider Foundation and Parley for the Oceans, who were aiding volunteers throughout the morning.

Participants came from all over L.A. and beyond. Diane Corrigan and her daughter Alyssa, for example, came from San Bernadino along with Girl Scout Troop 989.

“We just moved to L.A. and kind of saw the amount of pollution that’s easily building up here, and we wanted to help out,” said Kevin Nelson, who attended with his wife Sarah.

For more information about the Surfrider Foundation, visit surfrider.org and for the dates of upcoming beach cleanups on the Westside, visit healthebay.org.