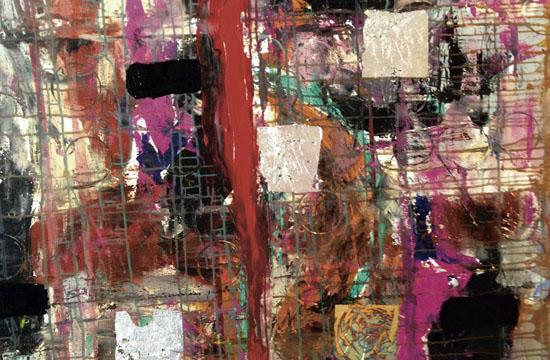 The art of Santa Monica resident, Charlie Patton has been exhibited in numerous galleries throughout Los Angeles. On Sunday Oct. 23, the artist will be opening in a solo exhibition entitled “Visceral” Intuitive Abstraction at the Upper West Restaurant.

“I have never shown at a restaurant before,” said Patton. “I am looking forward to doing this Upper West show because the restaurant is very cool. I love the space as it has the sense of a Soho gallery with high brick walls and bow truss ceilings and sky lights or ambient light to illuminate the art as if you were in a NY Gallery in late fall. It also is helpful that you have amazing food and wine to pair against the art.”

Patton began creating at a very young age, but it was not until 1998, that he began selling his work. He attended the Laguna Institute of the Arts in Laguna Beach. He then decided to study at the Florence Academy of Art in Italy. A whole new world of artistic possibilities opened up to him. He gained new techniques for his art and experimented with mixed media, abstractionism, impressionism and contemporary art.

I work in several different mediums, said Patton. I like acrylic because it allows quickness in drying and allows me to be less concerned with organizing the painting and to make visceral decision on color, and application. Oil has a different end result that I prefer but it it also needs a lot of time and thought in preparing for the painting process.

Patton said he chooses to work in series that are similar in subject matter, painting style, material, size of the canvas, and medium. “I normally paint 20 to 50 paintings in a series of which fifty percent of them will make it to the gallery and the remaining fifty percent are re-used or kept.” He explained that the painting Gandhi was a by-product of a re-purposed old painting that he re-painted in an abstract fugitive style. “I am a big fan of Gandhi and it emerged as a Gandhi looking painting.”

Patton also enjoys researching different artists. “Right now I am into Richard Diebenkorn who was a Northern California painter, but painted the Ocean Park series here in Santa Monica. He also was an abstract figure painting along with David Park,” he continued. “As far as emerging artists, I think Jennifer Verge is a sure bet to become very successful.”

Patton has shown his work in galleries in the Los Angeles area such as FAB Gallery in Santa Monica, the Queen Mary in Long Beach, Flower and Hewes Gallery in Malibu, and more.