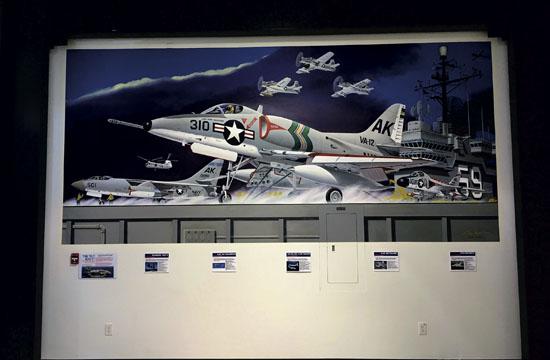 This past Sunday the Museum of Flying, located on Airport Ave at Santa Monica airport, unveiled a new exhibition showcasing the works of Mike Machat, who is an L.A.-based aviation artist, author, and historian. The exhibition is titled “Supersonic Palette” and consists of seven original paintings and five limited edition, signed lithographs. Proceeds from the sales of all exhibited works benefit the museum.

“I was born into an aviation family,” said Machat, about how he got his start as an aviation artist. He and his uncle, who worked in the aviation industry, would build models together, which led to Machat wanting a career as a pilot – until he required prescription glasses at 5th grade. He started drawing planes instead. “I did it as a kid because I loved it and it was fun, but at that time, I had no idea it would turn into a lifetime career.”

As part of the Santa Monica Art Walk, as well as one time a month during the summer, Machat does what he calls “Stump the Artist,” asking participants to name an aircraft he then has to draw with a marker. As he draws the plane, he explains its history to the audience, and then gives the drawing to the person who requested it.

“It’s a lot of fun because it usually involves a story. For example, an older gentleman will ask for a certain airplane, and it turns out he flew it in Vietnam. There’s always some connection when people call out an airplane,” said Machat.

Also being exhibited in the hallway housing the works that were unveiled on Sunday are three murals painted by Machat, all paying homage to the Douglas Aircraft Company, which famously built its DC model of commercial airliners, and was originally headquartered in Santa Monica, directly across from where the museum now stands.

Much of the time Machat spent painting these murals was during the hours the museum was open. Some airline enthusiasts made return trips to see these works through the creation process.

“My favorite story, is when I was doing the airliners, I had a couple of kids who really knew a lot about airliners. They came at least once a month to watch. They had these airline seats set up facing the mural. The kids would sit there, and they would fasten the seatbelts. It warmed my heart. It was so wonderful,” said Machat.

Each of his murals is of planes built by the Douglas Aircraft Company, either at their original Santa Monica home, or after their relocation to Long Beach. His first mural is a straight representation of the ten DC-series airliners. The second – which was designed to incorporate an actual electronics panel embedded in the museum wall, that became part of the painting – is of the six Douglas Aircraft planes built for the Navy. The third mural is of three “X-planes,” positioned on the wall so that they appear to be contiguous with model airplanes suspended from the museum ceiling, that were originally hung in the Douglas Aircraft Company building.

“I feel like we really touched some people by being able to tell the Douglas story through artwork. That’s why we’re here,” said Machat.

For more information about the museum, visit museumofflying.org.