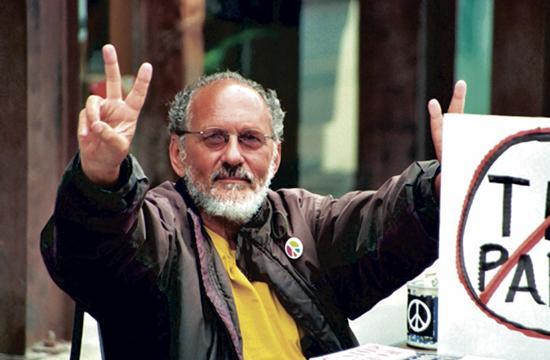 With little more than a month to go until the Presidential Election, longtime peace activist Jerry Rubin will hold a press conference announcing the start of a personal “ Be Green, Not Mean” protest fast he will be starting in hope of convincing Green Party presidential candidate Dr. Jill Stein to modify her campaign and not campaign actively in the “battleground states” if polls show the race to be close between Hillary Clinton and Donald Trump. Rubin says he hopes Dr. Stein will meet with him to discuss what Rubin feels could be a progressive win-win strategy rather than her possibly being a “spoiler” by indirectly helping Donald Trump.

The press conference will take place at 12:00 Noon on Friday, October 7 at Rubin’s “Dump Trump” bumper sticker and outreach table located on the sidewalk at 1440 Third Street Promenade in Santa Monica.

Rubin, who fasted in 2004 in hope of convincing former Green Party presidential candidate Ralph Nader to modify his campaign when George W. Bush was running against Al Gore, says the stakes in this 2016 election are just too high given Trump’s divisive, unethical and unqualified candidacy.

Rubin says he agrees with Bernie Sanders that the 2016 Presidential Election is no time for a protest vote.

Rubin is 72 years old and a resident of Santa Monica, CA. He is not related to the late 1960’s activist Jerry Rubin, although they had become friends. He has been a peace and environmental activist since 1979, has been on more than 40 protest fasts for various good causes, and is the founder of the Activist Support Circle, an ongoing open support group for progressive activists that started in 2005 to help guard against activist burnout.

Rubin says he will consume only liquids from October 7 through Election Day on November 8.