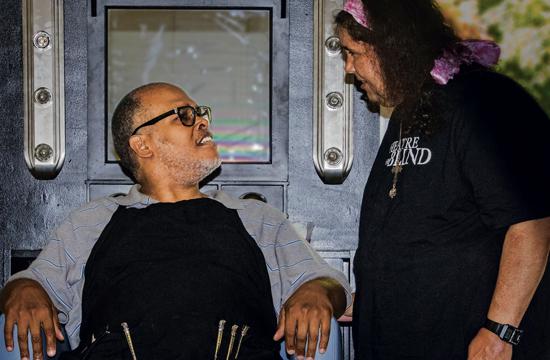 Santa Monica-based charities Theatre By the Blind and Rex & Friends have come together to co-produce an original play starring blind actors and autistic musicians. There will be a preview show of the play, “A Reason to Love,” on Oct. 19, followed by performances on Oct. 20, 26, 27, and Nov. 2 and 3 at Magicopolis on 4th Street in Santa Monica.

Co-founder of CRE Outreach and Director of “A Reason to Love” Greg Shane said he was interested teaming up with another group to add a soundtrack to the performance. A Google search led him to Rex & Friends, a nonprofit that uses musical education as an empowerment tool for blind and autistic individuals.

“It’s been remarkable because I think this is one of the most dynamic and challenging scripts that they’ve had to conquer, and I couldn’t be more proud of them,” Shane said.

The play, a dramatic comedy, interweaves several main storylines and characters through their interactions at “Kitty’s and Curls,” a hair salon. These plots include a transgender individual trying to gain acceptance from his family, a love story about a woman and her sugar daddy, and two sons vying for their father’s attention after their mother passes away.

The performers have been rehearsing for three months, overcoming basic challenges as well as those specific to the disabilities these individuals face. According to Shane and Founder and President of Rex & Friends Matt Wolf, organizing transportation for the disadvantaged performers as well as raising funds to rent out the venue have proven to be difficult tasks. Additionally, many of the musicians face their own obstacles regarding sound and being onstage.

“If they’re playing or singing, everything is okay because they’re controlling the sound, but if the sound is not controlled by them, sometimes it brings out a lot of emotion and nervousness,” Wolf said.

However, according to Shane, the cast and crew have worked together to conquer these issues. For example, mats are placed on the stage floor to help the blind performers become familiar with the set and know where they are. The show features a ballroom dance number by the blind actors.

“Everything is independent in this show, and that’s what’s so spectacular,” Shane said. “People think that blind people can’t do things, and we’ve had them rollerblade and skateboard in our shows. They’ve done everything and I’m so proud of them.”

Actor August McAdoo has been singing since he was three years old, and joined Rex & Friends in late 2014 replicas relojes rolex. He said the collaborative performance has been a unique experience overall and a great chance to meet new people

“As a singer, it’s a chance to not only perform and be seen, but a chance to just express myself with the talents that have been instilled upon me,” McAdoo said, “It’s an incredible way to make friends and speak to people you’ve never even come across before in your life.”

When asked about his future plans, Wolf said “A Reason to Love” will not be the end of these two charities’ collaboration.

“We touch audience members in a way that gives them idea of what it’s like to live with one of these disabilities, whether it’s autism, blindness, or both,” Wolf said. “Our main goal is to work together as two organizations so that we can continue to bring this beautiful kind of production to the public in the future.

The performance is sold out for its preview and first official show, a live-action gala on Oct. 20. Tickets are $25 for its remaining shows. More information can be found at  www.creoutreach.com.