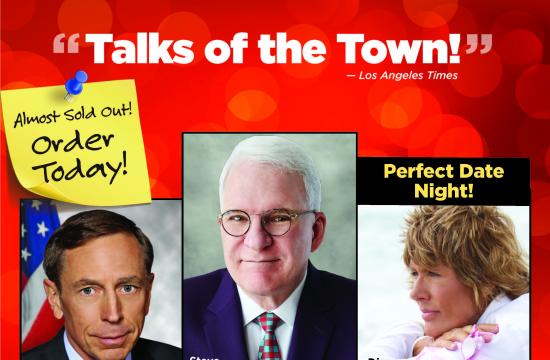 Beginning Sunday, October 23 at the Saban Theater in Beverly Hills, the Distinguished Speaker Series will showcase six, engaging and thought-provoking talks by some of the preeminent authorities in national security, comedy, sports broadcasting, and much more.

For each of the scheduled speakers, Beverly Hills is the first of four stops. Evenings with each speaker will be held on subsequent nights in Redondo Beach, Thousand Oaks and Pasadena. The Saban Theater was chosen as one of the series’ four locations since it’s big enough to keep ticket prices lower than if it were held in a more intimate space. There’s also ample parking near the theater, and little traffic getting there, since each event in Beverly Hills is held on a Sunday night.“The Westside of L.A. was missing this form of entertainment. We had found success in the South Bay, Pasadena and Thousand Oaks and felt the time was right to expand to the Westside. We chose the Saban Theatre in Beverly Hills because it is a beautifully restored theatre that had enough seats to accommodate the high caliber speakers that we present,” said Kathy Winterhalder, who is a co-owner of the series.

“I think the main thing that sets us apart this season is we do not have a speaker focused on national politics. We have learned now that we have presented the Distinguished Speaker Series for 21 seasons, that during an election year, the last thing our patrons want to hear is the views of a Democrat or Republican. That is why this season we have presented more speakers with backgrounds in worldviews, entertainment, adventure, and motivation,” said Winterhalder.

Steve Martin, who is most well-known for his appearances on “Saturday Night Live” and has also authored multiple books and toured as a bluegrass musician, rarely makes non-comedic, non-musical appearances. Additionally, Vin Scully is retiring from his role as the Dodgers’ broadcaster after this year’s season, making his appearance in Beverly Hills on March 19 something of a send-off for any baseball fans interested in hearing him speak once more.

“We are very excited that Steve Martin and Vin Scully have joined our Series this season. They both rarely do this type of thing. And come next Spring when we are all missing Vin Scully’s voice on the radio, we are thrilled he will be taking the stage for us,” said Winterhalder.

For a full list of dates and ticketing information, visit speakersla.com.