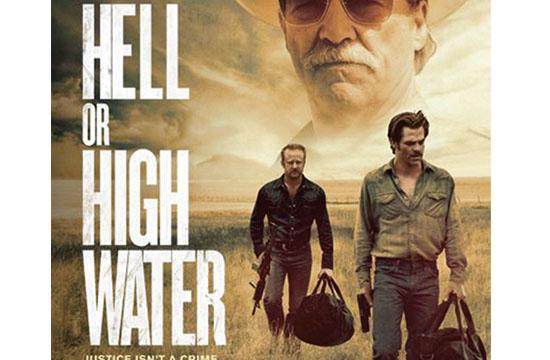 “Hell or High Water,” a crime drama starring Chris Pine as Toby Howard, Ben Foster as Tanner Howard, and Jeff Bridges as Marcus Hamilton, is a fascinating look at criminal deviance. In this case, two brothers (played quite well by Chris Pine and Ben Foster) decide to rob banks in order to save the family farm. The bank wants to do everything it can to foreclose on the ranch because oil has been discovered there. The duo wear ski masks when they are robbing branches of a particular local bank that just happens to be the one foreclosing on the ranch, so as to conceal their identity, and make it a point to try and not harm anyone at the banks. They also get themselves a different vehicle when possible after each robbery, to make them less easy to spot. Jeff Bridges is a Texas Ranger in pursuit of them and the low-key performance he gives is worthy of an Oscar nomination. The movie takes place in a small West Texas town and we really get a feel of the land and people there – everything seems to move slower and there does not seem to be much to do in the dry landscape.

Toby is the more reasoned and intelligent of the two brothers, with his brother having been recently released from prison. In an emotional and effective scene, Toby tells his teenage son that he does not want him to model his behavior after him. (Toby and the boy’s mother are separated and Toby has not seen much of his son over the years.) The interactions that the brothers have together feel natural and believable. The robbing of the banks causes Toby to be the more conflicted of the two.

The film bares similarity to “99 Homes,” another movie about economic disparity where someone is facing the prospect of getting their house foreclosed on and decides to take desperate measures to keep it.

Despite being a movie looking at serious issues, the film is actually quite humorous at times, in particular the scenes with Marcus and his law-enforcement partner Alberto (Gil Birmingham), exchanging good-natured insults. Marcus uses racist taunts against Alberto, who is a Native American, while Alberto who does not seem to be overly bothered by the taunts, fires back with his own derogatory commentary.

When Tanner decides to rob a bank, while he and his brother are finishing their lunch at a diner, I found this to be a shortcoming insofar as the brothers rob banks together and this one seemed more rushed, not to mention Tanner was running back to the car with bills flying out, which observers could have seen.

With a realistic feel, first-rate acting, and relatable themes of familial loyalty and economic struggle, the film is able to succeed on multiple levels.