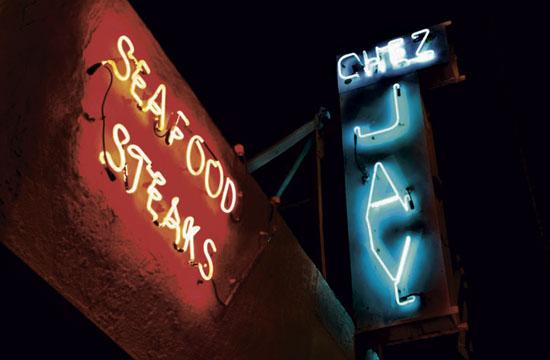 An aging, crusty, jaded reporter (his name has been left out to protect the innocent), met a slightly aged, jaded PR executive buddy (that would be me) for dinner the other night. The place provided the perfect backdrop for us to catch up.

The circa 1959 establishment itself is old, kind of crusty and definitely jaded. The martinis are well-chilled and made to perfection and the cuisine is classic old-school. The perfect spot.

To those who are not familiar with the place, it’s on Ocean, directly across from those large, luxurious beach front hotels. You may have passed it many times, not even knowing it was there. It’s a little shack, a dive, a hole in the wall with a strange sophistication and worldly experience.

We walk in, peanut shells on the floor crunching beneath our feet. The peanuts they serve are famous – I heard one of the peanuts even made it to the moon! Awesome.

There’s a large bar on the left, taking up the entire left side of the interior. Lots of regulars are there, warming those bar stools and drinking a few cold ones for more than 20 years.

Across from the bar, there are a handful of small tables with red and white table cloths, as well as a few red faux leather booths, reserved for diners. There are photos and memorabilia displayed everywhere. A jukebox is playing 50s and 60s music. Original owner Jay Fiondella was a world traveler and quite a character. He since passed away, but the tradition lives on.

After we finished our drinks at the bar, we were led to one of the dining tables, a few steps away from the bar. We studied the menu.

Compared to Beverly Hills steak house prices, prices are reasonable, with the average price of a steak $10 under the norm. And unlike other steak houses, the sides aren’t a la carte; each meal comes with Soup du Jour or a salad, potato and garlic bread. Just like the old days!

I ordered the lobster. It was perfectly steamed, served with butter and lemon. Classically simple. And priced well-below popular Santa Monica or Beverly Hills establishments.  It was amazing. I think I’ll go back tonight for dinner. It’s been a while.

Advice to all you foodies that have passed by this place on the way to the more “tragically hip” beachfront restaurants – don’t judge this book by its cover. You’ll be missing out on amazing memories, martinis and money, (that is saving money) and an amazing meal.