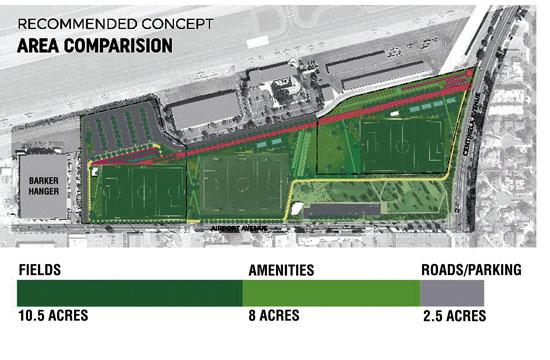 Santa Monica City Council has approved conceptual plans for 12 additional acres to the current 9-acre Airport Park. The feasibility and concept phase led by Rios Clementi Hale Studios (RCHS) resulted in a recommended concept adding two new multi-purpose fields for a variety of users, amenities for all ages, and a connection to nature.

“Through a robust community engagement process where 689 people weighed in online and in-person, an integrated concept emerged,” according to the City.

The existing playground and dog park will not change.

“The design reflects the community’s vision, doubles the size of the park, and will grow to become a beloved center of recreation,” said Santa Monica City Mayor Tony Vazquez. “We are thrilled with the multi-use concept and that so many people were an active part of the process.”

The agreement modification to be awarded to RCHS for Phase 2 design services including schematic design, design development, construction documentation and reimbursable expenses is $1,113,561 (includes a 10 percent contingency), for an amended agreement total not to exceed $1,324,761, according to the City Staff Report.

“While General funds have been identified to support the design phase for the Airport Park Expansion Project, alternative financing will be required for the construction phase. Estimated construction phase costs total approximately $39.3 million, which is more than the General Fund CIP annual allocation will be able to support,” the report states. “Alternative financing could come from a variety of sources including parks and recreation development impact fees, bond proceeds from a potential future County parks bond measure, and proceeds from a potential future local general obligation bond.”

Pending the identification of funding for construction, the project is expected to break ground in spring 2018.