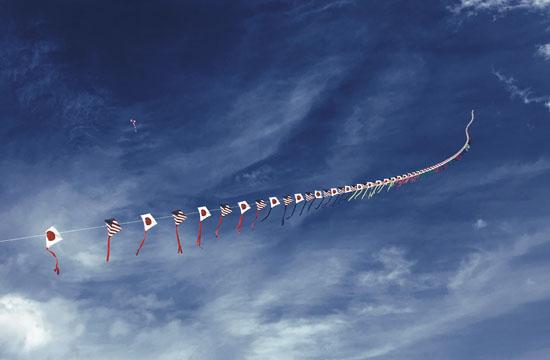 Santa Monica skies were alive with color Sunday, as the Japan America Kite Festival was held in the city for the first time.

Kites took over the skies above the beach adjacent to the Pier, with festivities bringing the entire area alive.

For the past 20 years, the Japan America Society of Southern California has held their annual Japan America Kite Festival in order to help foster a relationship between the people of Japan and America.

Children participating in the event were invited to a kite-making booth, where volunteers helped kids make kites they could then fly on the beach. There were also kid-friendly kite-centric activities held on the beach itself, like a competition between children of different age groups to catch the tail of a kite flown by an expert kite-flier, and a “candy drop,” during which candy was dropped from kites in small parachutes.

Also on the Pier were food stands selling rice balls, okonomiyaki (which is sometimes called Japanese pizza), and ramen burgers, which are a uniquely Japanese-American creation. Volunteers also led kids in games with prizes, and Japanese dance and Taiko drumming workshops and performances.

“One of [the kite masters from Japan], Mikio Toki, makes Edo style kites. Edo is the old name for Tokyo, and there’s only four people alive that still know how to make these kites, so it’s a real honor to have him here with us,” said Erber.

For more information about the Japan America Society of Southern California and to view a list of their upcoming events, visit jas-socal.org.