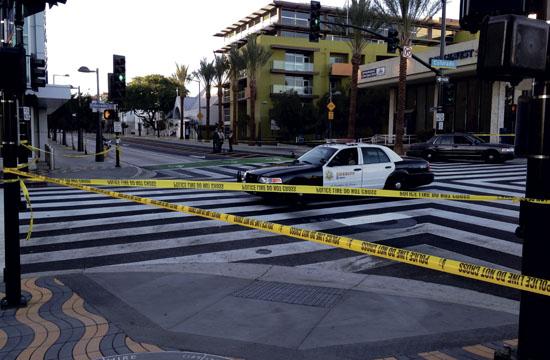 An investigation continued Thursday into the shooting of a man armed with two large kitchen-type knives who was wounded by a transit deputy at the Metro Expo Line station in Santa Monica, authorities said.

The shooting was reported about 12:55 p.m. Tuesday at the Downtown Santa Monica Station at Fourth Street and Colorado Boulevard, according to the sheriff’s department, which is responsible for security on Metro routes.

The unidentified suspect man was hospitalized in critical condition but was expected to survive, said Ramon Montenegro of the sheriff’s Transit Police Division.

The suspect had a knife in his right hand when he walked aggressively toward two deputies who were on the station platform, sheriff’s Lt. Joe Mendoza said.

“The suspect lunged toward the deputies and there was a struggle over the knife, at which time he produced a second knife, and during the struggle, a deputy-involved shooting occurred,” Mendoza told reporters at the scene.

Buses were brought in to transport rail passengers between the intersection of Fifth Street and Broadway and the 17th Street/Santa Monica College Station until the station was reopened about 8 p.m. Tuesday, according to Metro.