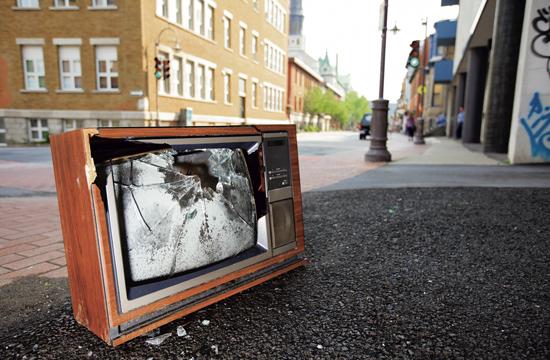 Those of you that actually walk the residential streets of Santa Monica, whether taking your dog around the block or heading to Main Street for work on your finger nails, will agree with me that there are stories to be told by the objects set out on our sidewalks. A coffee table and a cardboard box of worn books about psychology in the work place. A broken lava lamp. An old ergonomic office chair might mean simply that a new one was purchased. Or maybe there’s a deeper story about a relationship where two people were going to live together; he would work at home, then things got bumpy… now his chair is out on the sidewalk.

The things you find on the sidewalks of our city can often coagulate into a documentary film on the history of contemporary American furniture. Blond dresser and bed sets finally prove too  70s and now must go. Bean bag chairs have refused to evolve while lying on the living room floor like washed-up jelly fish, and so they are punished with removal as well. There’s the black shelving for stereo components; a past masterpiece of industrial craftsmanship with particle board, now piled in slivered and broken pieces.

And then there’s the TV sets.

My generation had a relationship with box televisions that possibly borders on the perverse. In the sense that old-school “TV sets” – with the big picture tube and circuit boards and even dials on their exterior – were more than appliances. There was the dimension of the family huddled or circled around the TV as they would a campfire. As a result of this shrine-centering of TV sets and TV viewing, one could sometimes try and remember the happiest times with their family… and in the center of that freeze-frame would be an old Philco TV set.

There was also the way that for Boomers the TV became a doorway to other lands and other realms. Yes, to watch an episode of the original “Star Trek” series now causes you to wonder how anybody ever fell under the sway of those plywood set designs and tacky velour uniforms.  But back in the day, that s**t worked for us, and we were taken were no man had gone before.

All of this is standard nostalgia boilerplate for any essay on television’s influence on America during TV’s most potent years. Alas, we are done relying on any one source of audio-visual delivery and instead getting our diet of “content” from multiple screens and sources.

And so, as we walk our neighborhoods, there they sit: Discarded black plastic boxes that, in their day, were the latest technology and our Magic Lantern to be rubbed for access to the larger outer world beyond the walls of our homes. There’s no ceremony, there are no words of “Goodbye and thank you for your service.” There is just the insult of sitting on a curb, with the rain and wet leaves gluing to your outside until someone comes to hopefully recycle your innards.

And please, do recycle your “thrown-out” television set because there’s plenty inside that can be used over again. Many old and non-working televisions contain lead and other hazardous substances, making it irresponsible to just throw them into a dumpster. However, properly recycled – and Santa Monica’s recycling center takes old electronics – there are materials such as glass, scrap metals and circuit boards that can be reused to make other products. Although, as is often the way with “progress,” newer liquid crystal display TVs and screens contain materials harder to recycle because they contain toxic substances. The junk of the future will be more hazardous than the junk of the past.

For those who may have just returned from Coachella, rock and roll will never die… even though it has long been replaced by hip-hop as the format for hit songs. And for many in that Dylan/Stones demographic, memories of box TV sets are right up there with the warmest recollections of childhood. Which just makes it all the more melancholic to encounter a discarded TV set on a sidewalk. Oh, the places we’ve gone. Experts on childhood worried that our generation would be ruined in some way by believing that we had actually been to Paris and Rome and the Arctic Circle… just because we’d seen those places on TV. Now we’re all panting in anticipation of virtual reality, so that we can have full sensory experiences we’re not actually having. Someday that hardware will be found sitting on a curb, perhaps pushed there by a perpetually nagging sense that we should get off the sofa and actually go outside for an experience.