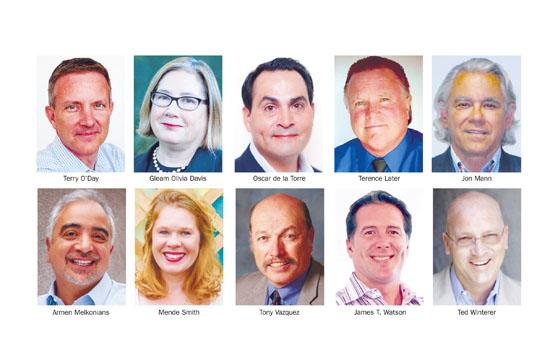 In the lead up to Santa Monica City Council elections, November 8, Santa Monica Mirror will host a 90-minute question-and-answer debate with at the Ken Edwards Center, Wednesday, October 26 at 6:30 p.m.  Measure LV will also be debated.

This season there are 10 candidates running for office, in addition to potential write-in candidates.

The following information has been garnered from candidate statements on smvote.org. The candidates are listed in alphabetical order.

Gleam Olivia Davis: City Council member since 2009, Davis is running on a platform of promoting a safer and more sustainable Santa Monica that is pedestrian and bike friendly, expanding educational opportunities, supporting increased employment and educational opportunities for all residents, encouraging the development of more open space and recreational facilities.

Terence Later: Business owner and third generation Santa Monican, Later hopes to make Santa Monica a cleaner, greener and safer place to raise families. Later also intends to work on safety in schools and recreation areas along with a proposed dog beach. Transparency and government accountability to make a sensible expenditure of taxpayer funds are also high on his agenda.

Jon Mann: Running for City Council for the 15th time, Mann looks to use his position to end cronyism, and conflicts of interest of revolving door politics. Mann believes in the idea of a Virtual Town Hall and Democracy for all. Mann also plans to lower building heights all over the city to a height determined by city residents.

Armen Melkonians: Leader of the Residocracy effort that gathered over 13,000 signatures to veto City Council’s approval of a massive development project, Melkonians has decided to take matters into his own hands by running for office. Melkonians aims to use his position to combat over-development in Santa Monica, which he believes, is destroying Santa Monica’s character and adding traffic.

Mende Smith: Poet, environmentalist, journalist and community activist, Smith is seeking election to work on getting more parks and open space, affordable housing and environmental sustainability. Smith’s philosophy is centered on the idea of listening to the community and enacting policies that will meet the city’s basic needs. Smith identifies as a Green Party candidate running for economic justice, social justice and residents’ rights.

Oscar de la Torre: Lifelong resident of Santa Monica with14-years of governance experience on the Santa Monica Malibu Unified School District Board of Education, de la Torre is aiming to gain a seat to concentrate his agenda on stopping overdevelopment, keeping Santa Monica Diverse, fighting for social, economic, environmental and racial justice, and challenging the culture of corruption at City Hall that promotes profit over people.

Tony Vazquez: Santa Monica’s sitting Mayor, having held terms on City Council in 1990 and 2012, is running on a platform that includes his role in overseeing the completion of the Metro Expo Line extension and the minimum wage ordinances approval. Vazquez is now looking to shift his efforts toward sustainable funding to increase affordable housing options and protecting the neighborhoods while balancing the needs of the thriving business community.

Ted Winterer: Councilmember and current Mayor Pro Tempore, Winterer plans to use his position, if re-elected, to protect residential neighborhoods from commercial intrusions and overdevelopment, preserve existing housing, improve mobility on congested streets, maintain diversity by protecting low-income tenants and seniors, incentivize adaptive reuse of historic buildings and assure that the economic engine of downtown thrives in a manner sensitive to community standards.

To send in questions for the City Council Candidates Forum, contact editor@smmirror.com