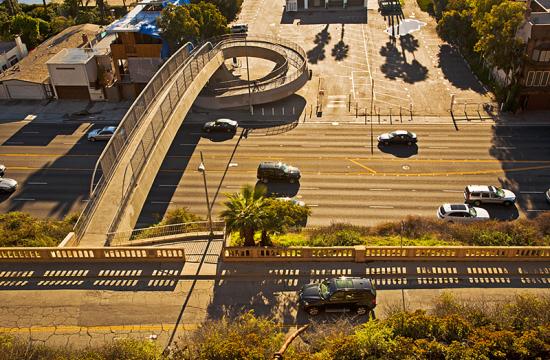 After conducting a structural assessment of the overcrossing in 2014, the City determined it was time to replace the bridge with a new one meeting current structural and seismic standards. Instead of following the original schedule, which called for the overcrossing to be replaced after the California Incline project, the City fast-tracked the design and construction to fit into the California Incline closure. The new curvilinear bridge provides pedestrians sweeping views of the Santa Monica coastline. The Idaho Trail was also improved and is now about 7 feet wide, roughly 1.5 feet wider than the old one.

Prior to the late1950s, the Idaho Trail touched down on the eastside of the California Incline and pedestrians used a crosswalk to continue on towards the beach. Around 1958, the pedestrian overcrossing was built and it remained in service for nearly 57 years.