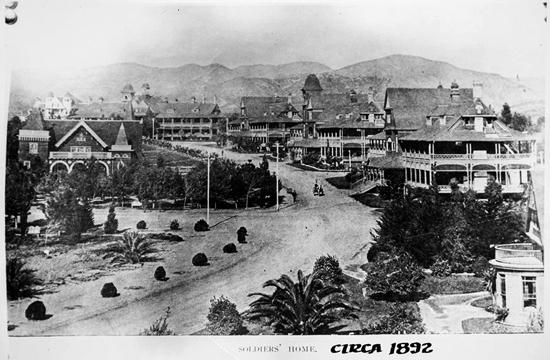 In 1888 Santa Monica civic and business leaders Arcadia Bandini and Senator Jones donated land to the United States government for the “Old Soldiers’ Home.” The Grant Deed came with the directive that it was to be, in perpetuity, a home for Soldiers of American Wars.

The land had been part of Rancho Boca de Santa Monica and is now known as the Los Angeles Veterans Administration.

How this all happened and what life at the Old Soldiers Home was like is currently on exhibit at the Santa Monica History Museum.

The Old Soldiers’ Home was a self-sufficient community. Veterans lived there, permanently. They worked as cooks, barbers, gardeners, tailors, they ran a communal dining room, had jobs at the hospital, had sports teams and more.

In the first part of the 1900s The Old Soldiers’ Home was a popular destination spot for Angelenos. It was listed as a Day Trip on the “Balloon Route,” as a famous Railroad Tour of the time was called.

Louise Gabriel, who along with her husband Bob Gabriel, was a Santa Monica History Museum founder said, “This exhibit is our way of honoring the Veterans. We are so proud of our City’s co-founder Senator Jones and of Arcadia de Bandini de Baker for donating the land and for their vision.”

Currently called the Los Angeles Veterans Administration, it no longer houses permanent residents. Many acres are unused. Los Angeles developers have long looked at the many acres of unused land and put forward ideas for the use of the land for building projects.

At the same time, according to a May 2016 article in the L.A. Times, an estimated 3500-plus homeless veterans live in L.A. County.

In 2008, 120 years after the land was granted to the U.S. government for a Soldiers’ Home, the Bandini Foundation was established. Their charter calls for the care, training and placement of Veterans in good jobs.

The Bandini Foundation runs the Heroes Golf Course and the Japanese Garden at the Veterans Administraton. They train Vets in landscape skills for jobs at schools, recreational facilities, parks and country clubs.

Professional golfers teach golf to Vets. And there is now a medical program where physicians bring Vets to the Heroes Golf Course for both the physical and emotional rehab they get through learning and playing golf. 150 Vets play golf there every week as part of their medical care.

Andrew Carrillo said, “In the late 1800s and early 1900s it was a Soldiers Home. Soldiers from the Civil War, the Spanish American War and the Great War (WWI) had all lived there. At one time there were about 6000 soldiers living on the property.”

If Andrew Carrillo, Ricardo Bandini and many Veterans, Elected Officials, and Veteran Administration Leaders have their way it will once again be, as Senator Jones and Arcadia Bandini conceived it, a home for the Soldiers of American Wars.