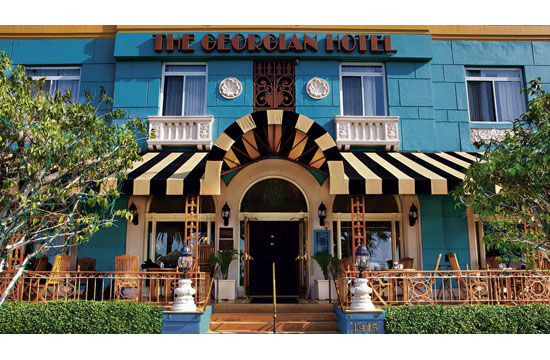 I love a place with an interesting history. And, I love a good meal. I put them together perfectly this past week, by lunching on the beautiful Veranda at The Georgian Hotel. The well-preserved, Santa Monica Landmark is close to 90 years old, and as I walk in, I feel like I am on the set of a glamorous, romantic movie from right out of the 1930s. A golden, winding staircase ahead of me, a seaside Art Deco-style sitting room to my left, and an intimate dining area and bar to my right. I feel as if I need to be wearing a soft, flowing light blue dress, with a stylish hat and gloves. The Georgian whispers of a refined, classic icon that I would have loved to be part of in its historic heyday.

“Can I help you?” asks the hostess. I wake from my daydream and am led to a charming table on the veranda for my lunch. The outside has as much character as the inside. Overlooking the sparkling blue Pacific Ocean just across Ocean Avenue, I smell the sea breezes and hear and watch the seagulls soaring above me. Why have I never been here before?

According to santamonicalandmarks.com, The Georgian Hotel was built the early 1930s as a seaside hideaway, nestled in the once-heavily-wooded shoreline of the then-little-known seaside community of Santa Monica. In 1933, The Georgian opened its doors during prohibition and was one of L.A.’s first speakeasies, catering to the rich famous and infamous.

And according to legend, The Georgian continues to play host to a number of unearthly guests (aka ghosts.) Both staff and guests have reported loud sighs, gasps, or a voice who greets them with “Good Morning,” when no one is in the room. At other times, the sounds of running footsteps have been heard when no one was there and a number of transparent apparitions have been seen. Cool.

The hotel was refurbished in the 1950s, the 1960s, and then in the early 2000s a $2-million renovation was completed. Now, according to the property’s gracious GM, Juan Viramontes, the hotel is about to undergo a stunning renovation of the lobby and restaurant, creating additional space for dining and cocktails for hotel guests, visitors and Santa Monica locals.

Viramontes assures me that the hotel will remain open during the entire process, with no interruption in service. Construction will be complete in early 2017. And that’s not all. Viramontes recently retained long-time restaurateur Rapheal Lunetta (Jiraffe) to consult with him on the property’s food and beverage program. Rumor has it that Lunetta plans to bring back the speakeasy that was so popular in the 1930s. Guess what he’s going to name it? We’ll hear more about this in next year

Oh – and Fatty Arbuckle, if you’re one of those “guest ghosts,” good for you. If I was a ghost, I would make The Georgian Hotel my home too!

The Georgian Hotel is located at 1415 Ocean Ave., Santa Monica. Head to georgianhotel.com for more.