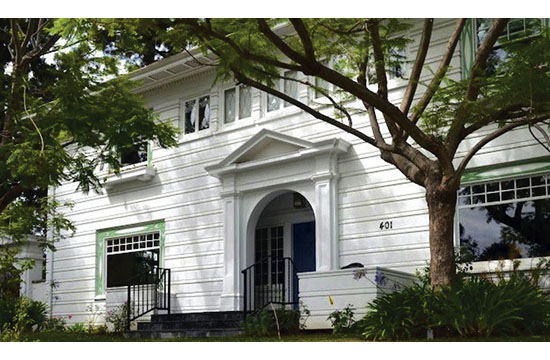 Celebrate the holidays in a landmark home designed by eminent Los Angeles architects Hunt and Burns, one of the first in its north of Montana Neighborhood on Sunday December 4 from 3 p.m – 5 p.m. Constructed in 1913 for developer Thomas Clark Bundy and his wife, tennis champion May Sutton Bundy, the home remains highly intact today, retaining its original blend of Colonial Revival and Craftsman features.

The house is notable not only for its fine architecture but also for the colorful stories of its owners. May Sutton Bundy was a pioneering female tennis player and sports celebrity whose career involved the making of numerous records,” the Conservancy said. “Winning her first tournament at age 12 in 1900, she was the first American to win at Wimbledon in 1905, and the first athlete to be selected as Queen of the Tournament of Roses. Neither marriage nor motherhood slowed her athletic career, and she continued to compete and take titles over several decades, winning her last match in 1975 at age 88, a few months before her death.”

Thomas Clark Bundy, also a tennis champion, was best known as a real estate entrepreneur, developing 2,000 acres in Sherman Oaks, as well as a large area at Wilshire and La Brea. He founded the Los Angeles Tennis Club near Melrose and Vine in 1920.

Party hosts, Meredith Stiehm and Tom Smuts, both successful TV screenwriters, are raising their young children in a home that combines heritage and contemporary amenities. They eagerly sought landmark status for their property and the Bundy House was designated as Santa Monica’s 108th Landmark in 2014.

Free to members, the holiday party is a chance for the Conservancy to thank the community for helping them further their impact on preservation in Santa Monica. Please RSVP at rsvp@smconservancy.org, or by leaving a voicemail at 310.496.3146.