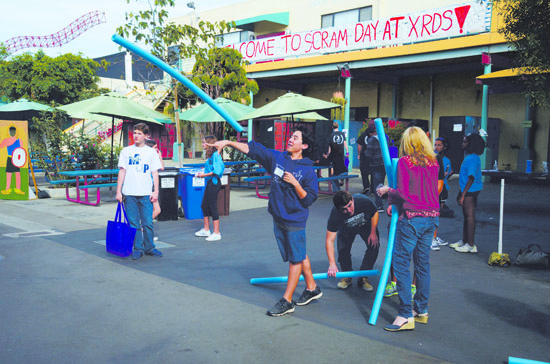 Santa Monica’s Crossroads School transformed into a Latin “festus” Saturday, Nov. 12, as its 21st Street Campus hosted the annual SCRAM Day (Southern California Regional Amicii Madness.) This is a yearly, regional convention that brings together students from 33 Southern California schools and one school in Las Vegas for a day of fun, games and academics, centered around Latin language education.

“We were happy that the school allowed us to host SCRAM. Usually they use big public schools. They’ve done it again and again. They were very glad that a small private school stepped up to do it, even though it’s taken some ingenuity and creativity. We can’t offer as much athletics, so we’ve offered a lot of arts, and we have a community service component,” said Jamie Meyer, one of the Upper School Latin teachers, currently teaching at Crossroads for his 27th year.

The community service component saw students collecting canned food to donate to the Westside Food Bank, and writing letters to soldiers as well as making bracelets in honor of Veteran’s Day.

Other activities students could participate in centered around traditional athletic events, alongside some of a more unconventional variety – for example, what they titled “water balloon battleship,” in which teams of students tossed water balloons at one another over a human-sized center divider, similar to that of the board game Battleship.

“We have a bunch of stuff like ping pong, dodgeball, basketball in terms of athletics. There’s chess, project runway, a karaoke machine and all these sorts of fun games like battleship and noodle javelin throwing. There’s a bunch of activities the kids can go to, including workshops, and they’re having a blast,” said Chrissy Gianni, a Latin teacher at Crossroads.

Of course, academics factored into the day in a multitude of ways as well. For instance, Robert Gurval and Amy Richlin, two professors from UCLA, hosted workshops packed with interested students.

“Some of the workshops students are participating in are illuminated manuscripts—they’re finding out who the Celts are – and making a copper foil project, and there’s a spoken Latin workshop,” said Marisa Alimento, Latin Curriculum Coordinator at Crossroads.

For students looking to put their academic knowledge to the test, academic competitions between students from the various schools were offered on a range of subjects, all under the umbrella of Latin and the Classics.

“Academic tests range from Roman daily life, to vocabulary, to derivatives, to mythology, which is always popular, and also a quiz bowl game called Certamen which is like a Latin jeopardy game,” said Alison Wedding, a Latin teacher at Crossroads.

Jack Sadoff, southern representative of the Junior Classical League and student at Crossroads High School, worked alongside the faculty in organizing students for the festival.

“It’s really exciting to be able to work with so many people that are passionate about the subject, but also passionate about sports or theater, and bringing it together under the umbrella of classics,” said Sadoff.