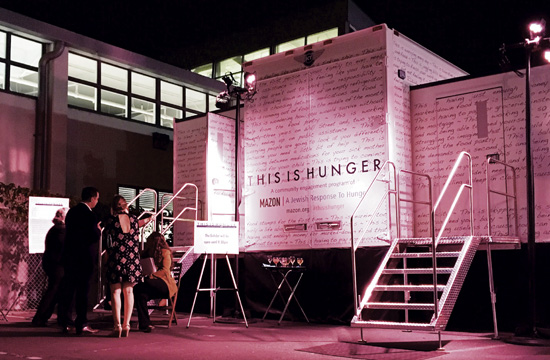 With the spoils of Thanksgiving over, a new multimedia exhibition “This Is Hunger” by Mazon: A Jewish Response to Hunger is under way at Santa Monica College (SMC) with the aim of challenging attendees to learn more about hunger in the U.S.

“This Is Hunger” uses state-of-the-art storytelling techniques and interactive elements to outline the plight of dozens of Americans who struggle with hunger. The experience was designed by members of the creative team behind Noah’s Ark at the Skirball Cultural Center and launched last week at Smashbox Studios in Culver City.

Los Angeles County has the largest estimated food-insecure population in the U.S., with nearly 1.5 mill

ion people struggling to put nutritious food on the table every day, according to exhibition organizers. However, Mazon CEO Abby J. Leibman says that the exhibit isn’t meant to be depressing or to convey a sense of helplessness. She hopes that “This Is Hunger” can empower visitors to get involved in efforts to help end hunger in their communities.

The traveling exhibit is in a double expandable semitrailer and will be at SMC until Dec. 1 before continuing its national tour. Tickets are free, with reservations recommended at thisishunger.org/the-tour as only a limited number of attendees can access the exhibit at any given time.