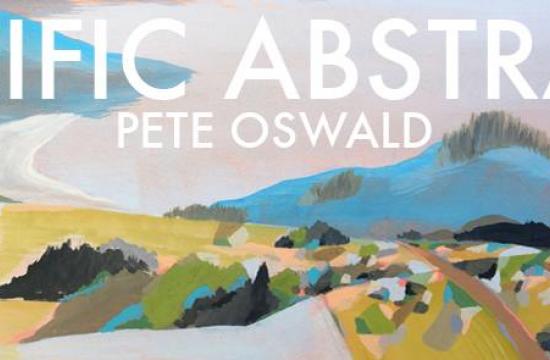 The one-night-only affair will be held at the trendy Bergamot Station, gallery #G7, which is located at 2525 Michigan Ave in Santa Monica. For his animation and illustration work, Pete draws on his fine arts background, which captures his observations in an impressionistic yet at times graphic style.

Pete’s inspiration for the show is the California coast he has lived next to and grown fond of since moving here from his native Bountiful, Utah to study at Loyola Marymount University.  “The West Coast is a vast and picturesque expanse,” he comments, “Over the years it has given me great comfort, escape and connection to nature. Pacific Abstract is a celebration of my favorite coastline. These abstract landscapes are inspired by personal experiences and memories. Each painting starts from a sketch or a photograph, but the heart of the image is the emotion it evokes. I’m drawn to the diversity of the scenery, for it is that contrast that makes it beautiful and unique.”

When not painting, Pete works as one of the rising stars in animated production design. For the past four years, he has served as production designer for the Angry Birds Movie, starring Jason Sudekis, Josh Gad, Danny McBride and Peter Dinklage. Responsible for the characters, lighting and set design, Pete and his team worked diligently to transform the popular mobile game series into an spectacular world for the silver screen. His other animation credits include, Madagascar: Escape 2 Africa, Cloudy with a Chance of Meatball 1 & 2, Hotel Transylvania; and ParaNorman, for which he earned an Annie Award nomination.  Pete also earned two additional Annie Award nominations for shorts that he directed and designed: The Story of Walls and Doubtsourcing.

Join Pete on November 12th for a memorable Santa Monica evening, filled with food, drinks, discussion, and fine art. His previous gallery showings include, WWA Gallery in Culver City, and paintings and prints will be also available on his website after the show, at peteoswald.com