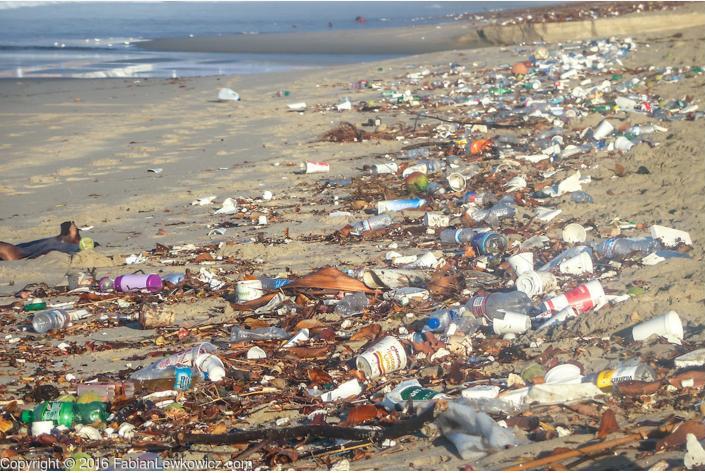 Resident Benjamin Kay  bumped into local photographer, Fabian Lewkowicz, on the bike path next to the Pico-Kenter Storm Drain this past Monday morning at 7:30am.  “I was in a hurry to get to work, but took my ninth annual “trashy” video of plastic pollutants at the mouth of the storm drain in front of Shutters Hotel.  Lewkowicz one-upped me heading seaward across the sand, and ended up capturing what would become viral footage of a dramatic “third flush” of the storm drain.  As of Wednesday, 11/23/16 at 2pm, there were over 80,000 views of a plastic-strewn beach,” Kay stated.

The “first flush” of the rain water passing through the storm drain system and into the ocean occurred early on October 17 this year.  A similarly-sized “second flush” occurred from rains early on October 31.  Both of these flushes resulted from light rains, so there was not enough water to completely sweep all of the sand (and litter) from the storm drain system into the ocean.

With the third flush, ample rain pushed the remaining sand out of the storm drain and scoured a deeper pathway to the ocean, facilitating passage of debris, mostly single-use plastics, into the ocean.  Waves and currents managed to wash a small fraction of the ejected materials onto nearby shoreline to produce an unsightly scene, captured by Lewkowicz.

Lewkowicz images are remarkably impressionable to say the least, and they highlight an issue that non-profits, residents, and many youth have been flagging for city council’s attention for decades.

“My students from Santa Monica High, especially Team Marine, have been raising awareness about this issue for the past nine years.  Despite measures to ban plastic bags and Styrofoam takeout containers, the panoply of plastic pollutants entering the ocean and washing ashore has lost little character over the years.  Improvements are slight at best because storm drains know no city borders and because plastic products banned in Santa Monicaare still brought into our city from neighboring areas that are less environmentally evolved,” Kay said.

Preventing this massive amount of plastic from entering the ocean remains an under-addressed issue.  As a relatively newer member of the city’s Oversight Committee for Clean Beaches, I have advocated to no avail, that our city strive to exceed minimal compliance standards set by the state and regional boards.

People incorrectly think and say that this is a city maintenance issue.  This issue stems from a combination of environmental illiteracy, poor product design and indulgence in non-biodegradable plastics, and a lack of political will to engineer an end-of-the-pipe filter at the mouth of the Pico-Kenter Storm Drain.

How many more trashy photos will it take before the city council acts outside the box on this issue?  How many more emails, speeches, and PSA videos will it take to get our school board to get serious about sustainability education and greening our schools?  Overall, I love our city’s progressive nature and environmental leadership, but we can and need to do better on this issue.  This problem will not be solved overnight, but holistic actions will expedite remediation.